You probably suspect that your dog understands some of the most basic words that you say. “No,” “sit,” “lay down,” and “stay” are likely the most common words you use to communicate with your canine companion. And if you’re like me, maybe you even talk to your dog nonstop throughout the day, not really believing that he understands a word you’re saying.

But what if you knew your dog could understand 1,000 words? How would this shape the things you say to your pet on a regular basis? Anyone who has kept up with dog news in the past few years has most likely heard of Chaser, a Border Collie who can do just that.

Her owner, John Pilley, is a professor of psychology at Wofford College, and has been teaching Chaser and observing her development. The dog shows proficiency in object naming and discrimination, as well as the ability to discriminate verbs.

For example, when she is being told to touch objects or to bring one object and place it with another, Chaser has proven that she knows the difference between instructions like “fetch Frisbee” and “paw Frisbee,” and between “to ball take Frisbee” and “to Frisbee take ball.”

RECOMMENDED: Does My Dog Love Me? Myths and Facts About Dog Emotions

Pilley wrote the book Chaser: Unlocking the Genius of the Dog Who Knows a Thousand Words to tell the story of the incredible process and journey they took together on Chaser’s quest for knowledge.

So how did Pilley manage to teach Chaser all these words? First, repetition; he would repeat the name of one object and have her find it over 30-40 times before moving on to another object. Then, he wouldn’t move on until she successfully learned groups of 8 objects.

If she was still not getting one, he would come back to that thing until she mastered it. Then, this became cumulative and increased to 20 objects at a time. 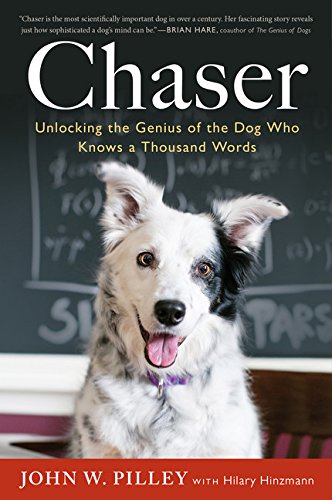 After objects came verbs. Pilley performed the same repetitive exercises with the three verbs “take,” “paw,” and “nose.” Then he combined these with the nouns she’d learned to instruct her to do various things with the objects.

The third layer Pilley added was syntax; he experimented with inverting “to” and “take” in the sentence “take Frisbee to ball.” When he changed this to “to Frisbee take ball,” Chaser proved her amazing skills by performing the commands correctly.

This proves that she not only understands words and connects them to objects, but she understands entire sentences and knows the subtle differences to be had between them.

Paul attributes play – not treats – as the successful training tool. Most people just use food to train their dogs, and nothing else; but according to Pilley, using play as a facilitator to learning is the best thing a dog owner can do while teaching things to pups.

RECOMMENDED: How To Train A Dog To Fetch – An Easy-To-Follow Video Guide

The biggest thing Pilley says he hopes people learn from Chaser is that she is not unique; that any dog is smarter than the owner likely thinks. Pilley hopes that Chaser’s story gives people an interest in not only teaching their pets words, but to get to know their dogs and what makes them happy.

This is an excellent example of an amazing dog who demonstrates that animals are much more intelligent than humans give them credit for. With an increased awareness in how canines can perceive our own language – the one thing we believe holds us separate from animals – will come a vast improvement in the way humans treat animals in the future.

People commonly believe that animals lack the intelligence and emotions had by humans, and in effect, they find it easier to mistreat animals or not care for them. Humans tend to not mistreat humans because of empathy, or the act of being able to place yourself in another’s shoes and understand their perspective or experience from their place.

Humans tend to not empathize with animals because they tend to not understand them. Once it’s understood that dogs can know what we are saying, I believe this will lead to significant improvements in animal welfare overall. This will lead to people living more in harmony with animals, and the world will be so much more beautiful once that happens.