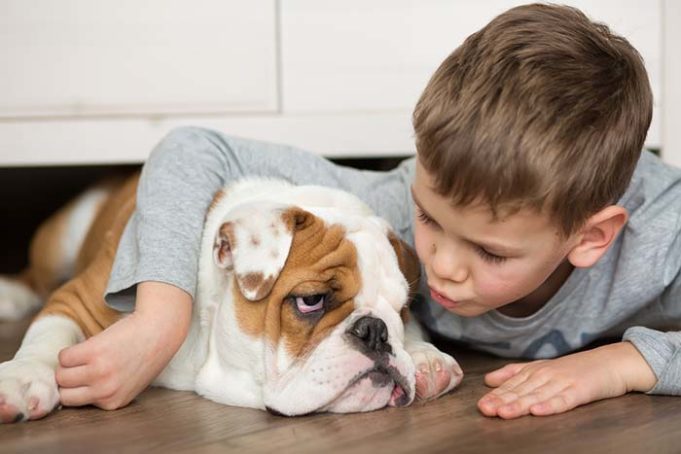 Unique research is underway to develop treatment for this rare form of epilepsy in dogs and human children called Lafora Disease.

Scientists from the University of Surrey’s School of Veterinary Medicine and Fitzpatrick Referrals in Surrey are collaborating with veterinarians and other medical professionals to try to uncover the clinical signs and advancement of Lafora disease, a rare condition which affects 50 children globally at any given time.

The goal is to examine affected dogs with the disease in order to develop effective treatment for children. Currently there is little in the way of treatment, and no cure.

What is Lafora Disease?

Lafora disease is a genetic disease, inherited from parents. It is rare because both parents must carry a recessive gene in order for the child to get the disease. In children, onset tends to occur in late childhood or adolescence, while in dogs onset tends to occur after about age 5-7.

The most common symptom of Lafora disease is chronic seizures, which vary in type and generally become worse over time for the patient.

RELATED: Researchers Discover a Better Treatment for Epilepsy in Dogs

Lafora disease is caused by mutations in the genes which encode proteins which play a critical role in brain functionality; therefore, this type of epilepsy affects neurology significantly.

Currently there is no cure or way to slow down the progression of this disease. Treatment for symptoms depends on the patient. In dogs, the seizures can be resistant to epilepsy medications.

In dogs, certain breeds are more predisposed to Lafora disease, including wire-haired dachshunds, Basset hounds, and beagles. Beagles are susceptible to a more severe version of the disease.

The prognosis for people and dogs with Lafora disease is poor. With no cure and progressive (worsening) symptoms, people survive for an average of 10 years after the onset of symptoms.

A Look at Dogs Provides Insight and Hope

In collaboration with specialists at The Hospital for Sick Children in Toronto, researchers performed a survey on the owners of 27 miniature wirehaired dachshunds over the course of one year in order to track the symptoms and physical progression of the disease.

Dr. Clare Rusbridge is a Reader in Veterinary Neurology at the University of Surrey and Chief Neurologist at Fitzpatrick Referrals. According to Rusbridge, the rarity of this disease has, until now, made it very difficult to understand the disease enough to develop treatment or cure. But by studying these dogs over time, enhanced understanding of the progression of Lafora disease will help lead to quicker diagnosis in the future, and eventually, more effective treatment.

The genetic mutation for Lafora disease was only discovered in 2005, and that was thanks to the long-standing relationship between Dr. Rusbridge and the Hospital for Sick Children.

And now, armed with more knowledge, the Wirehaired Dachshund Club and Dachshund Breed Council are both campaigning to increase awareness and genetic testing for this disease in dogs used for breeding.

That campaign is proving successful. In just 5 years, the proportion of litters born with the risk of Lafora disease decreased from 55% to under 5%. With more knowledge, this tragic disease can effectively be eradicated from dog breeds altogether.

READ NEXT: Epileptic Seizures in Dogs: Symptoms and Treatments