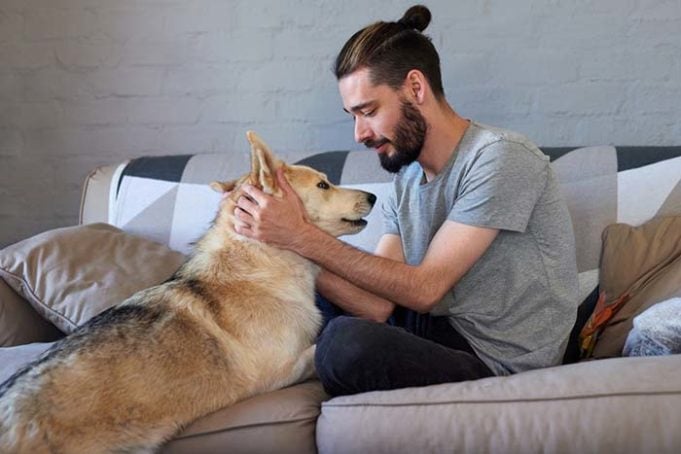 According to recent research, human empathy can extend to dogs when it comes to interpreting facial expressions.

Science already knew that people with higher levels of empathy are able to more quickly and intensely evaluate the facial expressions of other people. But new research demonstrates that they can do so with dogs, too.

This study, conducted by the University of Helsinki and Aalto University, explored how empathy, along with other psychological aspects, affects people’s abilities to assess facial images of dogs and humans.

The results show that a person with a lot of empathy, or the ability to share the feelings and experiences of another, has their perception of dogs’ facial expressions affected more heavily.

The study provided evidence that there is a difference between empathetic people and people who have lots of experience with dogs, when it comes to interpreting facial expressions.

Someone with a lot of empathy may be better able to interpret a dog’s facial expression than a professional who has been working with dogs for years, but who lacks empathy.

However, when it comes to entire body language, the person with more experience working or living with dogs is better able to interpret than a person with empathy who lacks the experience.

This is likely because the face is a biologically important stimulus for humans. We don’t focus on body language as much as facial expression. This is hardwired into us. But other animals’ emotions and intentions are more heavily expressed in body language.

It is also easy to misinterpret or over-interpret a dog’s feelings based on facial expression. This is because humans express things differently than dogs sometimes. When we show our teeth, it almost always means we are happy and smiling. When a dog shows its teeth, it could indicate a number of things, including fear or aggression.

The Animal Mind research group at the University of Helsinki has already demonstrated that dogs easily recognize threatening expressions in dogs and in humans. Interestingly, dogs stare intensely at threatening dogs, but look away from threatening humans.

Human subjects also provided interesting results; they would recognize threatening expressions in dogs and consider them much more intensely than they considered similar human expressions of threat.

By contrast, humans assessed happy expressions more intensely in humans than they did in dogs. Researchers suggest that this may be due to someone considering the faces of their own species more pleasant simply because it’s more familiar (and therefore perhaps more relatable).

People may find it more difficult to recognize happiness in dogs; this is demonstrated by the fact that dog trainers are generally able to assess happiness on a dog’s face more easily than other people can.