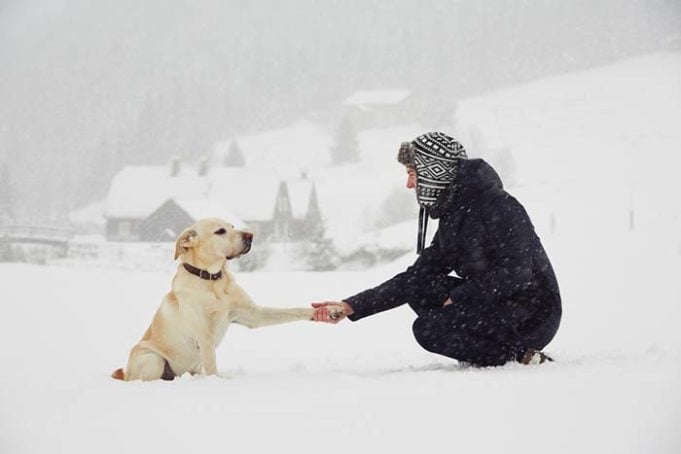 Researchers have discovered that suffering in animals produces more sadness for people than suffering in their fellow humans.

These days, we have all the world’s current events at our fingertips. With the abundance of available information to take in comes a lot of bad news about suffering going on in the world.

There is war, disease, starvation, natural disasters, and violence. Some of this affects humans, and some of it affects animals.

Well, it’s not just you. Recently, researchers examined this trend to see if there was any truth to it. Turns out, there is!

It started two years ago, when medical research charity Harrison’s Fund put out two posters for public display asking for donations to their cause, which helps those suffering from Duchenne Muscular Dystrophy.

As it happens, Duchenne occurs in both young children and in dogs. Both posters were identical, with the message, “Would you give £5 to save Harrison from a slow, painful death?”

And the version that received the most donations was the poster of the dog.

More recently, another group of researchers piggy-backed on this idea and set out to discover more connections in human-dog empathy.

RELATED: Duchenne Muscular Dystrophy in Dogs Can Finally be Treated

The study was led by Professors Jack Levin and Arnold Arluke at Northeastern University in Boston.

For their study, they gave 240 students one of four fake newspaper articles to read.

Every article identically described an attack with a baseball bat, and a victim. The scene was described, explaining that an officer arrived to find the victim unconscious and suffering from a broken leg and multiple lacerations.

The difference was that in each article, the victim was different; it was either a one-year old infant, a 30-year old adult, a 6-year old adult dog, or a puppy.

After reading their article, each student was asked to describe their emotions using questions which measured their level of empathy.

Victims were more distressed when the victim was a dog or a child than they were when it was an adult human.

Does this reaction resonate as one that you might have? Why do our hearts hurt more for one victim than another when the pain they are suffering is probably identical?

The researchers surmise that we’re more likely to empathize with victims we consider helpless and unable to defend themselves – in other words, kids and animals.

An adult human can fight back and look after themselves. So, they get less pity from their fellow adults.

Interestingly, this study also found that female participants were more empathetic toward all victims than males were. This could perhaps be because females are the caretakers, which would explain why you will find many more women working or volunteering in animal rescue than men.

These researchers concluded that men and women alike view animals as members of the family, using the term “fur babies” to describe how people felt about their pets.

So when we read about an animal suffering from a painful disease or from abuse, it hits a little too close to home and we feel pain imagining what that animal is going through.

How Can We Feel So Much Emotion for Non-Human Animals?

Scientists theorize that this emotional response has to do with relating the animal’s condition back to ourselves.

In 2014 and 2015, a man discovered an Osprey nest in Massachusetts and started live-streaming the day-to-day life of the bird family. And the reaction of people was surprising.

As we all know, mother birds demonstrate a pretty harsh sense of “tough love” to keep in line with the laws of nature. Many people know this, but when they had to see it for themselves, they became outraged.

People couldn’t tolerate the “abuse” the mother osprey enacted on her children and some even demanded that the mother bird be “done away with” so she wouldn’t cause her baby birds to suffer any longer!

This conflict of ethics probably comes into play because when we imagine this happening to ourselves or our own family members, our emotions can trump logic. So knowing that nature can be harsh no longer matters when we see a baby bird kicked out of a nest and offer up that bird’s perspective to ourselves.

Of course, a dog suffering an attack by a human is a bit of a different story.

So if you think you or the people around you have more pity for a dog enduring suffering than people, it’s not just you. It’s just the way we work.

This is not a bad thing. In fact, it helps people jump into action to alleviate and prevent suffering of innocent animals, which can only serve to make the world a better place.

READ NEXT: Your Dog’s Emotions Can Now be Decoded with a Dog Collar