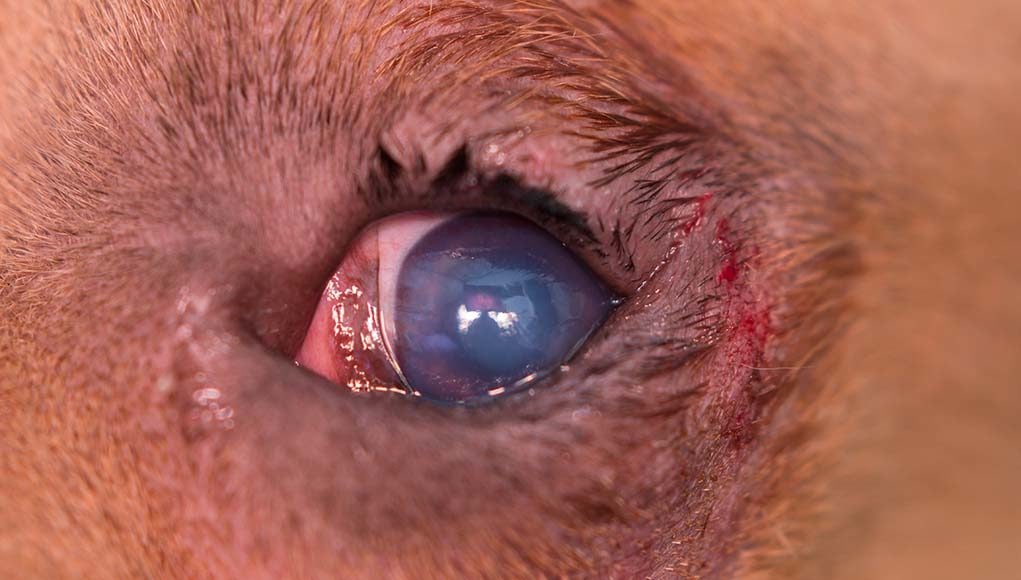 Entropion in dogs usually affects both eyes, and if left untreated can lead to serious complications for your pet. If you have noticed you dog rubbing their face along the floor, or you suspect that your dog is having a problem with their eyes, it is important to take them to see a veterinarian to get a diagnosis and avoid the issue developing into something much worse.

In this article we will discuss:

Entropion is an eyelid abnormality. The condition involves the eyelid rolling inwards.

This is what a case of entropion in a dog looks like: 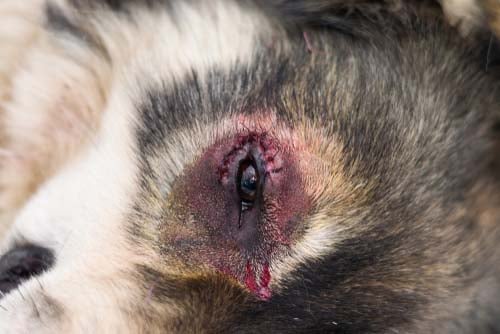 This is a very uncomfortable and even painful condition because the fur and hairs on the inside of the dog's eyelid rub against the surface of the eye, causing damage and irritation to the cornea.

This friction causes a variety of eye problems in dogs, anything from conjunctivitis and eye infections to corneal ulcers, perforations and other eye issues. A dog's vision can also be impaired if pigment forms on the cornea. Typically, entropion affects both eyes and can result not only in severe pain but also scarring, and even the loss of an eye.

What Are the Signs and Symptoms Of Entropion in Dogs?

It is usually evident when a dog has something wrong with their eye – you will be able to observe them either squinting or holding the eye shut.

Watery eyes (epiphora, which is excessive tears) and often a mucoid discharge are present. Red eyes are also common, and you may see your dog rubbing their face with paws or along a soft surface like your carpet. Recurring conjunctivitis, eye infections and eye ulcers are all likely signs and symptoms of entropion.

What Causes Entropion In Dogs?

Entropion is considered a hereditary disorder and is often diagnosed in puppies less than a year old. Entropion can be seen occurring in a variety of different breeds, but it can often develop due to a number of specific factors, such as face shape.

Dog breeds like the Shar Pei, St. Bernard and Chow Chow all have excess skin around their eyes, which can lead to the development of entropion. Flat-faced breeds like Pugs and Bulldogs are also at risk.

Other possible causes of entropion in dogs include pain, which can cause the eyeball to sink into the socket. This is a typical situation for entropion to occur. The saggy skin that comes along with old age can also cause eyelids to roll inwards, and is very common in Cocker Spaniels.

Another circumstance is when saggy skin might become present are after a dog's weight loss, increasing the risk of entropion. And of course, any eyelid injury, surgery, or skin problems that affect the eyelids can all contribute to the development of the condition.

How is Entropion in Dogs Treated?

It is preferred to wait until the puppy is around that age due to the fact that they could improve within that time as they are still growing. Your veterinarian may suggest a temporary procedure in extreme cases in order to hold a puppy’s eyelid in a more natural position, helping to protect the eyes while they grow.

During surgery, the procedure involved in order to stop an eyelid from rolling forwards includes a section of skin being removed, which tightens the eyelid. The two surgeries, potentially utilizing hyaluronic acid, are performed together in order to help to reduce the risk of over-correcting the entropion, which would lead to an ectropion. This would result in an outward rolling eyelid.

Additionally, the dog will be given antibiotics, eye drops and artificial tear lubricants both prior to and after surgery. These help to protect the cornea and treat any other problems resulting from the entropion.

After surgery, dogs will usually wear an Elizabethan recovery collar to prevent them from bothering their eyes. This will need to be kept on at all times until the vet recommends to take it off.

If left untreated, entropion can lead to blindness. After surgery is completed, however, the dog is pain free and is unlikely to suffer from the condition again.

Can You Prevent Entropion in Your Dog?

Unfortunately, due to the fact that the condition is mostly a side effect of the way certain dogs are bred to look, and is a genetic predisposition, there isn’t much to be done to prevent entropion in dogs, aside from not breeding from dogs that have suffered from it, as they are likely to pass the condition on to their puppies.

It is recommended to be observant, and any sign of eye or skin issues around the face should be treated promptly to avoid the development of entropion. Upon diagnosis of entropion, you should have your dog treated straight away to nip the problem in the bud and relieve your pet of all the pain and discomfort, and potentially save an eye.

Entropion in dogs is a serious condition that can lead to very serious health issues, including loss of an eye, so it is extremely important to recognize the symptoms early so that your dog can be treated.

Whilst dog's eye surgery can sometimes feel daunting, it will be essential to save your dog’s sight and remove their pain. The procedure is straightforward and after it has been performed your dog will not experience entropion again.