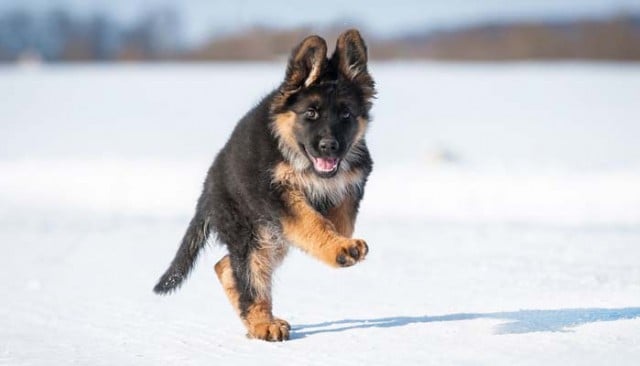 Last week, I wrote about Diesel, the police service dog who lost his life in the line of duty in Paris, France. Diesel was a Belgian Malinois whose job was to go in, asses the danger of a potentially life-threatening situation, and find any traps before his human team moved in.

In this time of terrible loss and the continued fight on terror, as a show of support, Russia authorities have gifted a police K9 puppy to France.

Dobrynia, an adorable shepherd puppy, is on her way to France. Named after a hero of Russian folklore known for his strength, courage, and goodness, Dobrynia is being sent to help “in the fight against terrorism,” Russian government officials stated.

According to a tweet, Russian Interior Ministry said, “This dog will be handed to France in a testament of solidarity with the French people.”

Talk about an amazing gift with a huge meaning!

According to the Russian Interior Ministry's Facebook page, the puppy “is the personification of force, of goodness, of bravery and altruism.” It is a sign from Russia to France that they are very serious about increasing their already strong alliance; a form of support that is full of significance and kindness.

Who would have thought a puppy could mean so much in our world today?

Here we are in the year 2015, the world is becoming an increasingly scary place: people shooting each other over road rage, a little girl is missing for less than 30 minutes and is found dead and many other unbelievable stories that we hear everyday. It seems sometimes that the world is becoming a dangerous place to live.

RELATED: Where Did This Police K-9 Come From?

Then you have Russia gifting a puppy to France as a show of support and companionship in the fight against terrorists. It just goes to show that no matter how crazy the world becomes, dogs still have that ability to brighten our day and build some of the strongest bonds imaginable.

Throughout history, the dog has developed numerous meanings and symbolism. A few include loyalty, intelligence, protection, cooperation, assistance and community. These are things Russia is offering to France during this devastating time.

Dogs are actually anxious to serve. This puppy is going to have a big place with an important role in many lives. In addition to the bond between countries he helped form, he will also save countless lives, serve his country well, and help put an end to terror attacks, or at least one of them.

Dobrynia will be trained to sniff our illegal materials, track down criminals, search buildings for explosives, and do other jobs human officers can’t do. People can’t pick out smells like dogs can; therefore, they can do a job much faster and more accurate than a human.

RELATED: 14 Scientifically Proven Cases Where Dogs are Better than Doctors

The very presence of a police dog alone can change the situation. Many suspects know they can’t escape or reason with the dog which prevents physical confrontations.

Just like any other police officer, service dogs have forms of protection as well.  Many are fitted with bullet proof/puncture resistant vests and squad cars have remote controlled opening doors so the dog can be released from afar if needed.

If you are ever confronted by a police or military dog, safest thing to do is listen to the handler. The dog is extremely well trained, has an unbreakable bond with their handler, and will do what the human asks.

When Dobrynia is old enough to retire, he will find himself back in the home of one of his previous handlers to enjoy the rest of his days.  Until then, has big paw prints to fill.  He is making the world a little bit safer for not only the people of France, but for us all.  He is one important little dude!