Biologists at the University of Arizona have recently made progress in understanding dog behavior by discovering the role some hormones play in canine aggression.

Every year, thousands of dog bites occur, leaving dog owners and scientists alike eager to better understand some of the reasons behind this behavior.

Understanding where it comes from can help us avoid it in the future. This can help prevent injuries and dog homelessness as well.

In studying canine aggressive behavior, scientists at the University of Arizona have discovered that two hormones may play a very important role in the biological reasoning behind biting behavior: oxytocin and vasopressin.

How come some dogs can have their treat taken away or walk on a leash without issue, but others lash out when in these situations?

Although numerous previous studies have looked at the role of serotonin and testosterone in canine aggression, research lead Evan MacLean says his study indicates that these hormones may be only a portion of the equation.

MacLean’s findings were recently published in the journal Frontiers in Psychology.

A Look In Other Directions

“If there are ways to intervene and affect biological processes that produce aggression, that could have a huge benefit both for people and dogs.”

MacLean initially became interested in taking a closer look at oxytocin and vasopressin because of their increasing significance in the research being done in the field of social behavior.

In humans, oxytocin can easily be found in new parents, or when we embrace a loved one. People with chronic anger issues tend to have elevated levels of vasopressin.

Dogs of various ages, genders and breeds were recruited for this study, all of whom were reported by their owners as struggling with leash aggression.

RELATED STUDY: Dogs’ Fear and Aggression Can Be Genetic

Each dog’s hormone levels and overall responses were measured before and after each interaction.

None of the dogs reacted aggressively toward the bag, box, or ball. But many of the leash-aggressive dogs had adverse reactions to the model dog. Their reactions included lunging, barking, and growling.

These reactive dogs exhibited more elevated levels of vasopressin in their systems.

The interesting part about the oxytocin was that it was observed to perhaps factor in to suppression of aggression. Assistance dogs, who are specifically bred to be non-aggressive, have higher levels of oxytocin in their systems.

This suggests that dogs with more oxytocin are simply just nicer and calmer dogs. 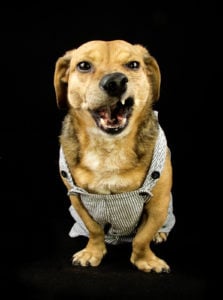 To date, current medical solutions for aggression in dogs revolve around the hormones serotonin and testosterone. Testosterone is typically observed to decrease upon neutering, so many people choose this option. In addition, aggressive dogs tend to be prescribed SSRIs (selective serotonin reuptake inhibitors) – a common form of antidepressant which increase the levels of serotonin being pumped into the system by the brain.

Armed with this new information about oxytocin and vasopressin, future research may be able to consider alternative and better intervention methods which accommodate the significance and presence of these hormones in aggressive canines.

It wouldn’t be far off. According to MacLean, humans are already using these two chemicals extensively as therapeutics. Oxytocin regulation has been used to help improve conditions such as schizophrenia, autism, and PTSD.

There are also clinical trials being conducted which consider giving oxytocin as a drug to help improve behavioral responses.

So it’s only natural to think that future methods may include incorporating these hormones into drugs for beneficial use in aggressive animals.

As to why some dogs have higher levels of vasopressin, life experience may be a factor, MacLean said.

MORE: The Science Behind Aggression in Dogs

So why is it that some dogs have more or less of one hormone than another dog has?

MacLean surmises that upbringing may have a lot to do with it. Life experiences can change the way hormones function, in both humans and non-human animals.

Many owners actually report the onset of their dogs’ aggression as occurring just after a traumatic incident, such as being attacked by another dog. This is a very similar response as PTSD.

For those who worry that non-existent medications might be their only hope, MacLean reminds us that there are current and more holistic options already available to people whose dogs are struggling with aggression.

One option is to help your dog practice friendly dog-human interactions. This can increase your dog’s oxytocin levels and decrease his or her vasopressin levels.

A bonus feature is that petting dogs and having positive interactions with them increases oxytocin levels in humans, too – a win-win situation!

If your dog is experiencing issues with aggression, consult a canine behavior expert, who may be able to shed light on possible triggers, as well as solutions.

READ NEXT: Scientists Now Understand How Rabies Works in the Dog’s Brain