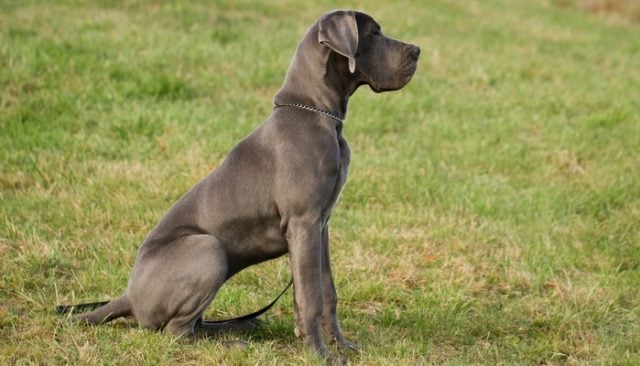 You won’t believe how the fire department catches this Great Dane puppy that weighs 120 pounds when she slips from her harness! We have all seen dogs do some funny things but it’s rare that they try to get a better view by climbing trees. This puppy, Kora, who is bigger than most full grown dogs, was being adventurous and got twenty feet up in a tree but then couldn’t get down.

Luckily she stayed put and started whimpering instead of trying to back down the limb. She could have easily toppled right out of the tree, but her instincts must have kicked in and told her to stay still and wait for help.

Her owner, Wes McGuirk, was concerned and started to look around the house and yard for the puppy. To the owner’s surprise he started hearing whimpering coming from above his head! That’s when he realized his great dane puppy was stuck in the tree.

Imagine the shock you would feel when you see your dog that high. It's scary enough when your pet is lost, but to see her dangling in the air above your head would be a nightmare! It must have been scary running to get the ladder and trying to keep the dog calm. The owner wouldn’t have been able to carry a one hundred and twenty pound dog down a ladder realistically and he found he couldn’t reach the puppy anyway.

That’s when he called in for backup. Of course, Elmwood Volunteer Fire and Rescue didn’t actually believe a great dane puppy would be stuck in a tree, but he finally ensured them to come quickly and that his dog’s life was at stake. They showed up with their big ladder and secured a harness to the dog…

…but wait until you see the video. The dog slips from the harness and falls toward the ground. People holding a tarp catch the dog before she hits the ground.

The tarp helps to break the fall, and as you can see in the video, he walks away a little confused but not injured. It was a team effort but this puppy was able to walk away without any broken bones. The fire department must have been proud of their efforts that day!

It certainly was one of the most unusual calls they will get, but at least it makes for a good story with a happy ending. So the next time your dog is missing, don’t forget to look up, maybe they are stuck in a tree too!

Someone was able to catch this on their cell phone and post the video to Facebook. Now the video is going viral, because people like to hear when good things happen – especially when animals are rescued from dangerous situations. This story proves how goodhearted people are and also how dogs have an instinctive intuition when they are in danger.

It’s probably not the best idea to teach your dog to climb trees, so don’t go getting any ideas folks! Remember to share this video to help people see how we can come together out of concern for animals to help them, it’s actually very touching.