Some of you may have laughed when you read the title of this article. While it may seem like a joke to some, many dog owners understand that this struggle is all too real. It's actually quite a common issue, and it's not too difficult to learn how to train a dog to poop on a leash.

It's not natural for a dog to poop while attached to a leash. They want privacy while using the bathroom, and it will take some training to show them that it's okay to go when confined by a leash. 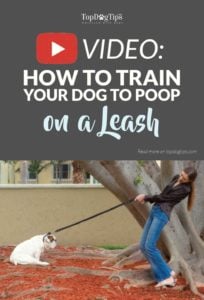 It's inevitable that you'll need to know how to train a dog to poop on a leash eventually. Even if you have a large yard where your pet can use the bathroom, he'll have to go on a leash while out for a walk, traveling or recovering from an injury.

Attaching a leash to your dog restricts his personal space. If you start walking your pet daily when he is a puppy, it will be much easier to train him to use the bathroom while attached to it. If your dog isn't used to walking on a leash, you'll follow the same training process, but it may take a while longer.

Before you can learn how to train a dog to poop on a leash, you'll need to teach him to walk on one. You can check out my quick video guide on the subject for instructions.

How To Train A Dog To Poop On A Leash 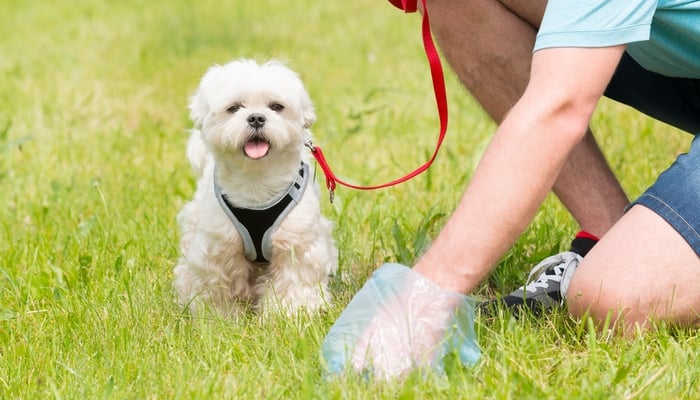 Be Patient and Observant

As I mentioned, it's much easier to teach your pet to use the bathroom on a leash while he's a puppy. It's okay if you're trying to train an adult dog, though. Just remember to be patient; he's already formed habits that you're now trying to change.

In order to learn how to train a dog to poop on a leash, you'll need to know his schedule. If you feed him at the same time everyday, it's likely that he'll usually poop around the same time too. For example, if you feed him in the morning before leaving for work, he's probable going to be ready to do his business by the time you come home.

RECOMMENDED: How To Stop Your Dog From Pooping in the House or Crate

If you think it's about time for him to have a bowel movement, attach the leash to your dog's collar and take him outside. Bring a few dog treats with you. Walk your dog over to his favorite bathroom spot and let go of the leash. 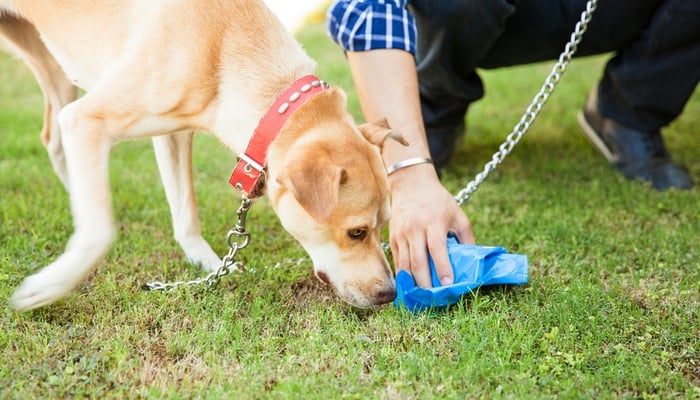 Hanging onto the Leash

Now it's time to move up to the next step – hanging on to the leash. After your pup has pooped with the leash attached a few times, try holding on to it. It's probably going to take a little while longer, but just be patient.

You'll probably have to walk around a bit, and there's a good chance Fido will keep giving you “the eye.” Just keep walking him on the leash until he goes. Once he does, dig out those treats and give him lots of praise. He'll quickly learn that pooping on a leash isn't so bad.

If you've been waiting for more than 15 minutes and your dog still hasn't done the deed, take him back inside and try again later. Don't wait too long though, or you may have to clean up a mess in the house instead of picking it up with poop bags. I would suggest waiting 15-20 minutes and then trying again. Keep this up, and he'll eventually have no choice but to go when on the leash. 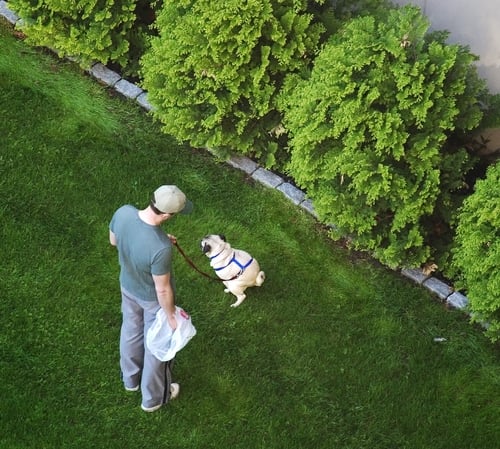 The key to learning how to train a dog to poop on a leash is consistency. You'll have to take your dog out on a leash every time he needs to go outside for at least a couple of weeks.

If you're like me and you have a big yard for him to roam in, this may seem rather inconvenient. Trust me, it's the only way!

Remember that dogs usually prefer to go poop in their own yard. Don't try to train your pet to poop on a leash while traveling. Also, if you live in an urban area your quickly learn where Fido's favorite poop spot is and you can do your training there.

Also, you'll need to practice this behavior frequently if you want it to stick. Try to take your dog out to go potty on a leash at least once each week. This will reinforce the behavior and ensure that your dog will be ready to “go” if you have a spur-of-the-moment reason to keep him leashed.

WATCH NEXT: How To Train A Dog To Stay In the Yard 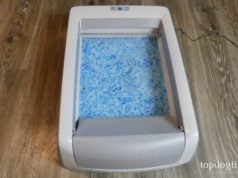 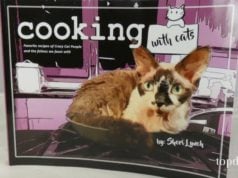