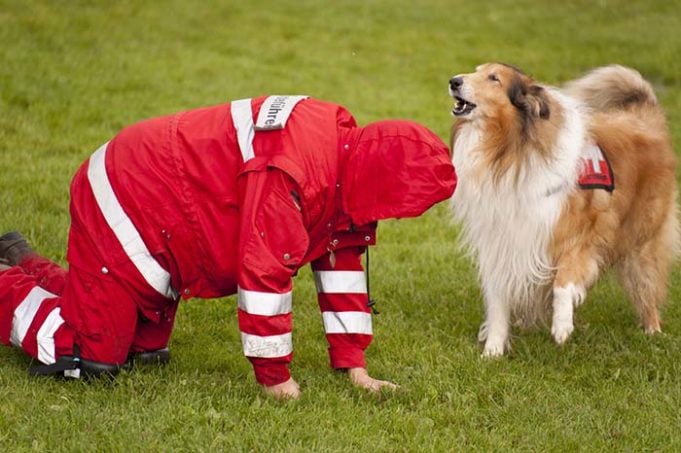 New research explains how important our encouragement is to our pets. Nine dogs were able to complete the task better because they got some assistance from their owner.

Humans or pet owners who shower their dogs with encouragement can boost their dog's ability to solve problems, experts from the Oregon State University learned in this new study. The researchers, led by Lauren Brubaker, analyzed the behavior of two groups of dogs.

One group had 31 domestic pets, while another group composed of 28 dogs were from a search and rescue team. The results of the study were published in the Applied Animal Behaviour Science journal.

“While most dogs increase the amount of time they spend attending to the puzzle when encouraged, pet dogs often end up treating the puzzle like a toy. Instead of engaging in goal directed behavior, they act as if their owner was encouraging them to play.”

The dogs of varied breeds were given the same task in the same time frame to measure their approach to a problem. Specifically, they were asked to open a box with a sausage inside in under two minutes.

The researchers wanted to compare the behavior of search and rescue dogs to pet dogs with the knowledge that the first group had the training to work independently. Though search and rescue dogs have handlers, the general idea is that they can provide assistance in emergency situations without any prodding from a human.

The group of pet dogs, on the other hand, was randomly selected from a 2015 data.

The experiment was done in phases but the owners first showed the dogs they placed a sausage in the box. The first part had the dogs working on the puzzle alone. The second part, called the neutral phase, also involved their owners who were asked to stand in the room but was told not to communicate with their dogs.

The next part, called the encouragement phase, allowed the owners to prod their dogs to finish the task in whatever manner they deemed appropriate. Some owners uttered verbal phrases while others gestured towards the container. They were, however, not allowed to touch anything.

The experiment revealed that both groups of dogs were enthusiastic about their task in the beginning. Sometime later, however, it was the group of search and rescue dogs that achieved more success in completing and solving the task, and it was because their owners or handlers encouraged them.

“Because search and rescue dogs are trained to work independently, we expected that they would out-perform pet dogs on this independent task and that wasn't the case. This suggests that the behavior of the owner, including their expectation of their dog and how they engage with their dog on a day-to-day basis, may influence the dog during a problem-solving task.”

But the study also showed that when the search and rescue dogs were left alone to their tasks, no one did anything. Further, the study revealed that pet dogs that tried to solve the task, with their owners around but not exactly giving encouragement, were also able to complete the task by themselves.

Brubaker said that they thought search and rescue dogs would do better at the task alone since they're supposed to know how to work independently. But the study also explained the impact and influence of a pet owner’s day-to-day interaction with their dogs.

Animal scientist Monique Udell from the Human-Animal Interaction Lab in the university's College of Agricultural Sciences said that the few pet dogs that completed the task might have regarded their owners' encouragement as a form of play. It did not, however, direct them towards the actual goal.

Search and rescue dogs, on the other hand, saw the prodding from their owners as part of a job they have to complete, and thus many of them were able to successfully do the task. This meant that their communication with their owners was more effective.

The Intelligence of Dogs

Just like humans, dogs' ability to learn involves a variety of skills. Some can hunt, some can track, some can herd sheep, or some can retrieve objects.

Dogs develop better chances of learning skills if their owners know what their breed does best. But in general, the top dogs deemed to have natural intelligence are the Border Collie, German Shepherd, Golden or Labrador Retriever, Rottweiler and the Shetland Sheepdog.