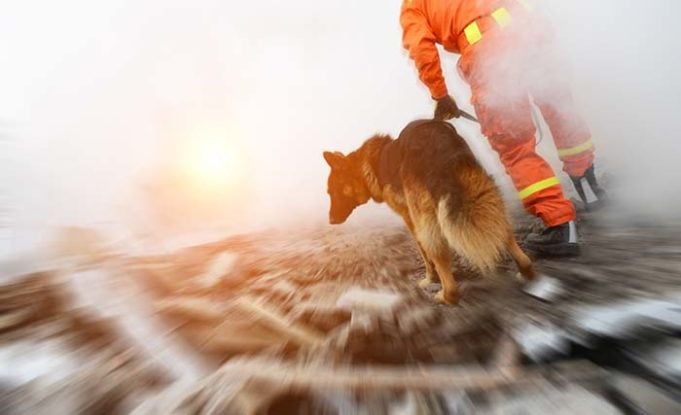 Most of us heard or read about dogs and other animals behaving oddly before an earthquake, owners often assuming their pets can predict an earthquake. But scientists say that's not the case.

There have been numerous stories, like this one, and videos, like this, about dogs' curious behavior before an earthquake happens. So, are pets able to sense and can dogs predict earthquakes before they happen? For centuries many pet owners claimed to have witnessed their dogs' ability to know when an earthquake happens. A recent study, however, stated that there's no real evidence dogs, or other animals for that matter can predict earthquakes, or any reason they would have that ability.

“Many review papers on the potential of animals as earthquake precursors exist, but to the best of our knowledge, this is the first time that a statistical approach was used to evaluate the data.”

In this new study, experts at the GFZ German Research Centre for Geosciences looked into records of anecdotal evidence and testimonies. They studied the data in an attempt to get into the heart of the matter, only find that many of these claims have no scientific basis. Their findings were published in the Bulletin of the Seismological Society of America.

Study author Heiko Woith said in the press release that they went over previous review papers on animal behaviors and earthquakes. They learned that most of these studies had no statistical approach. In fact, their research was the first to have conducted such an approach by combining all the details from the papers in the hopes of extracting quantitative data.

Woith and his team covered 180 studies that had 729 reports of farm animals, dogs and other pets that supposedly manifested weird behaviors in at least 160 earthquakes. They checked each detail in the claims and also looked into the quake's magnitude, as well as any reported foreshock activities. The experts also considered the quality and integrity of the publications that reported these claims.

Most of the data came from three earthquakes: in Nagano-ken Seibu in Japan in 1984, in L'Aquila in Italy in 2009 and in Darfield, New Zealand last 2010. Aside from dogs, the claims also reported odd behaviors from cows, sheep and other farm animals.

ALSO READ: Do Dogs Have A Sense of Time?

No Proof To Uncover

Woith and his team, however, noticed a few common glaring information from these claims.  Some said that they noticed their dogs' behavior just seconds before the earthquake, while others said they noticed the weirdness in their pets months prior to the natural disaster.

Aside from the fact that the timeline of the animals' weird behaviors varied greatly, the pet owners were only able to track the strangeness just once.  The researchers said that any data that might have qualified as a substantial and scientific claim was too small. Thus, there was actually no way to prove the claims.

Dogs And Their Hearing Ability

“The animals may sense seismic waves — it could P, S or surface waves — generated by foreshocks. Another option could be secondary effects triggered by the foreshocks, like changes in groundwater or release of gases from the ground which might be sensed by the animals.”

Apparently, dogs are believed to sense a coming earthquake because of their heightened hearing ability. They can supposedly hear the grinding underground that it could make them anxious, so they would manifest odd behaviors.

Psychologist Stanley Coren did a study on Seasonal Affective Disorder in 200 dogs several years ago. For about seven months, the pets' owners self-reported their behaviors to Coren for his data. One day, however, he came across data where a 6.8 earthquake took place in the Pacific Northwest.

Forty-nine percent of the dogs apparently had anxiety prior to the occurrence. Coren, however, stated that his data couldn’t conclude anything based on one single observed event. So, he cannot also provide any proof that dogs have an ability to predict earthquakes.

But this isn't the first or second-time scientists have said that there's no real basis to the notion that animals can sense an impending earthquake even as stories of animals’ odd behaviors have been told since Ancient Greece. Mike Blanpied of the U.S. Geological Survey told Washington Post in 2010 that no one has clearly demonstrated the alleged special ability of dogs to sense this disaster in advance.

Woith, however, implied in the recent study that the rumblings of the earth could indeed trigger something in dogs. Only, long-term observations must be done and abnormal behavior in animals must be analyzed quantitatively to be able to draw up real proof.