Search and rescue dogs experience significant travel stress while flying to disaster sites, but quickly get over it in order to perform their jobs.

Dog owners who are often worried about their dogs experiencing stress during travel or other situations that may spike anxiety in their pets will be happy to know that there are better ways to travel with dogs to reduce stress for your pet (but not always). Search and rescue dogs are here to prove that.

Given how freighted dogs are of thunderstorms and fireworks, it may be hard to believe but we all know that when disastrous situations such as tornadoes, earthquakes, or war-zone bombings occur, dogs are among some of the best resources to aid in rescue and recovery efforts.

It's true that dogs undergo stress entering these situations just as humans do. However, despite that stress, dogs know their higher purpose, and quickly shift into rescue mode to accomplish the tasks at hand.

Dogs Are the Best Tools We’ve Got

Erin Perry is an assistant professor in the Department of Animal Science, Food and Nutrition at Southern Illinois University. According to her, the U.S. has spent $16 billion attempting to devise machines which can detect odors better than dogs – and it hasn’t been accomplished yet.

Because search and rescue dogs locate survivors during disasters, protect soldiers in combat, and save countless lives, Perry says it’s important to protect their performance.

Perry has been a canine handler in the Department of Homeland Security for 14 years. She teamed up with U of I animal scientist Kelly Swanson, among others, and together they set out to learn how stress impacts the jobs of these animals.

The Science of Travel Stress in Dogs 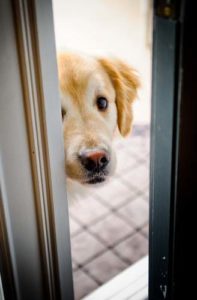 Traveling and flying with dogs specifically can be produce anxiety for pets. Without warning, they can be put into a plane, and escorted to a disaster site. Here, they are expected to immediately perform at their best.

The research team wanted to know how exactly flying stress impacted the dogs, and devised two studies which looked at the side effects of air travel stress on the physiology and job performance of the animals.

According to Swanson some dogs exhibit signs of stress during or after flying, such as diarrhea and increased body temperature.

Why would stress produce loosened stools?

One reason may be that the dog's gut microbiome shifts and changes occur in the gut’s physiology when stress kicks in. A microbiome is the community of microbes which live in the guts of mammals. Stress also can produce a leaky gut lining, and can also produce “bad” microbes which can cause stomach upset.

While these symptoms have been observed in search and rescue dogs, scientists have not yet studied the microbiomes of the dogs in question.

In one study done by the team, dogs were flown in a quick flight and in another, the dogs were flown in an extended flight. The first group was put on a 30-minute helicopter flight, while the second group endured a 2.5 hour flight in a commercial airliner (with airport security checks included).

Perry and Swanson’s team observed that the helicopter flight produced less stress – only the dogs’ temperature and cortisol (stress hormone) levels increased. But the dogs on the longer flight were the ones exhibiting altered gut microbiome changes.

Dogs on the longer flight showed an increased presence of Clostridia and Bacteroidaceae populations in their guts, which seemed to contribute to upset stomachs. More research will be needed to understand any long-term impacts this may have on the health of the dogs.

What impressed the researchers the most was that in both studies, while the dogs were stressed, they still showed optimal performance at the search and rescue site. So while they were physically impacted by the stress, they were able to overcome it mentally and get right into their vital rescue work.

What This Means for All Dog Owners

Despite the stress not impacting the performance of these dogs, the researchers remind us that stressed animals do occasionally miss work. But this research may help to prevent that in the future.

In addition, this research can be extended into everyday life. All dog owners can relate to a dog being afraid of things like thunder, vacuums, and other common daily life encounters. According to Perry, getting a better understanding of the stress responses of dogs can help us help our companion animals – not just the ones out in the field working.

This research can also aid pet owners whose pets travel with them.

According to Swanson, future research will have the goal of developing nutritional intervention and management strategies which will help avoid negative physiological changes in dogs’ intestinal health and to maintain positive performance.

READ NEXT: 6 Important Tips for Long Distance Traveling with Your Dog