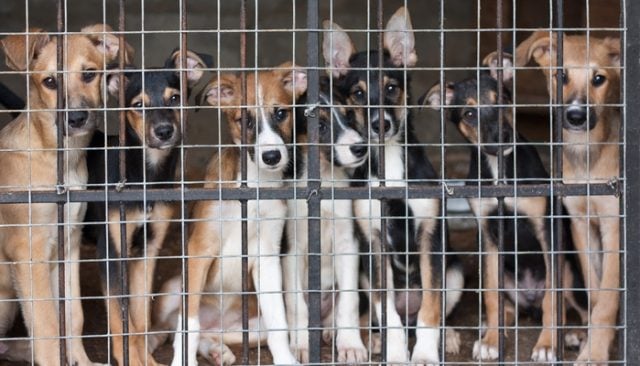 If an image could launch a thousand ships, then this photo definitely moved thousands of likers and sharers! Better yet, it saved two lives along the way! A heart-wrenching photo of two pups hugging each other shows adorable, but ill-fated, pups cooped up behind bars – one dearly hugging the other, and both with mournful looks as if desperately pleading for human care and intervention.

This touching scene was captured inside a rural Georgia animal shelter. They barely had a day to live when this picture was taken. The shot was taken by an adoption coordinator at Etowah Valley Humane Society and posted on Facebook by a charity group, Angels Among Us Pet Rescue.

In a flash, the image and the urgent plea from Kala (the eight-month old hound) and Kiera (the one-year old boxer) went viral. The plea for help tells of how both pups were scared to death inside the shelter anticipating the inevitable. The post was flooded with likes and shares from concerned pet lovers, and donations also came pouring in.

Probably one of the most lovable and poignant hugs ever seen on Facebook, it helped a community of Samaritans raise enough funds to support the medical needs and expenses for both pups, and bailed out the cute pair from sure death. In a subsequent update, the same charity group posted another photo, both safe and secure, and together.

They’re now in the care of the man who took them to a vet for the much needed medical attention – and hopefully towards a happy future in a new home.

This is certainly a happy ending for Kala and Kiera; but alas, there are yet thousands of Kalas and Kieras dreadfully awaiting their doomsday. They can’t all have their pictures taken, but we know they’re out there hanging on to dear life with the sword of Damocles hanging over their heads.

Unless adopted, thousands of dogs' fates are already sealed. There has long been a call, better yet a cry, for responsible pet ownership. As long as pet owners continue to allow their pets to reproduce without considering the offspring’s future homes, there will always be unwanted and abandoned dogs like Kala and Kiera.

The truth is, there are more pets in the country than there are homes willing and capable to care for them. On the other hand, putting pets in animal shelters up for adoption (barring those critically- or terminally-ill pets) should take precedence over endorsing euthanasia. The fact is animal shelters in some states have a high-kill incidence.

Unlike human euthanasia (where stringent guidelines are followed), the practice of euthanasia on animals offers scant protection and is open to abuse.

In the case of Kala and Kiera, a bit of good fortune was on their side. Had not their mournful image gone viral, they wouldn’t have escaped imminent death. We can only take our hats off to the charity group for their quick action, and to all those wonderful people whose selfless act of compassion greatly contributed to the rescue of these sweet girls.