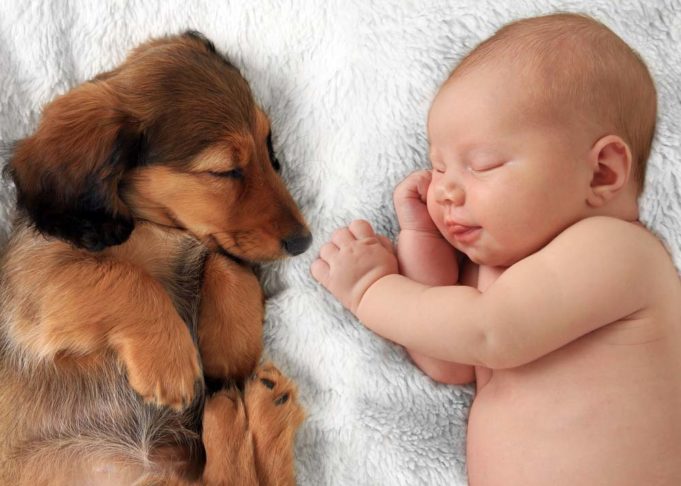 The latest research shows that having a dog around in early years may alter bacteria in a human's gut in ways which enhance the immune system.

When new parents have a baby, they oftentimes choose to not get a dog, or even get rid of the dog they do have. They do this for various reasons, but a big factor in this decision is their notion that it is the best decision for the baby’s safety and health.

But that could be a mistaken assumption, according to scientists.

It turns out that having dogs around both during pregnancy and post-birth can significantly improve the health of children by strengthening their immune system. This is due how bacteria transferred from dogs affects the infant's gut flora.

This new study demonstrates links between exposure to pets in the infant's early developmental stages and lower rates of asthma, allergies and obesity.

What Exactly Does the Science Say? 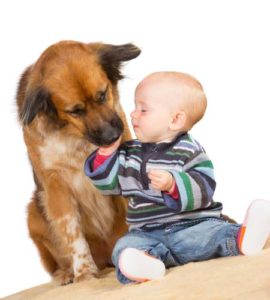 A new study from the University of Alberta published in the Microbiome and Nature journals has revealed that babies raised in families with pets showed higher levels of microbes which are responsible for lowering the risk of developing allergies and obesity in humans.

In this study, about 70 percent of the pets were dogs.

The trick seems to be in the timing. According to U of A pediatric epidemiologist Prof. Anita Kozyrskyj, PhD there is a critical window of time for the microbes and gut immunity to be able to develop. When disruptions occur in this process, it can result in changes to the overall gut immunity.

Kozyrskyj is one of the world’s top researchers on gut microbes. These are microorganisms or bacteria which live in our digestive tracts, often referred to collectively as gut flora.

These latest findings are built upon the research that Kozyrskyj and her team have been conducting for years. For the past two decades, they have collected fecal samples from infants registered in the Canadian Healthy Infant Longitudinal Development (CHILD) study.

Their findings indicate that kids who grow up with dogs also have lower rates of asthma.

The theory behind why this may be rests in exposure of growing children to dogs. When kids are exposed to dirt and bacteria in their early years – for example, that which is found in a dog’s fur or on its paws – the body gets the chance to create early immunity.

How does exposure help build immunity?

The body’s defense system “remembers” pathogens. Therefore, it is easier to fight them after exposure, because the body has already rehearsed and mastered the battling skills needed to fight off the infection or disease.

The team has taken scientific understanding of the connection one step further.

They have successfully identified that exposure to pets while in the womb and up to 3 months after birth results in an increase in the presence of two key bacteria known as Ruminococcus and Oscillospira. These two bacteria have been linked to reduction in the development of childhood allergies and obesity, respectively.

The increase was not negligible, either. The abundance of these two bacteria was doubled when there was a pet in the house.

One significant fact is that the pet exposure is shown to affect gut microbiome indirectly – meaning that the exchange does not have to occur between the dog and the baby. It can occur from dog to mother to baby.

This means that even if the dog is given up for adoption just before the mother gives birth, the healthy exchange of microbiome still takes place.

However, these findings also indicate that it is not wise to give your dog up for adoption just because you are giving birth. Contrary to the supposition that gets people to that decision, the science says that it is healthier for your baby’s development if you have a dog around.

Fascinatingly, this healthy exchange occurs even when birth occurs in scenarios which are themselves known for reducing immunity: C-sections, antibiotics during delivery, and lack of breastfeeding.

Those are some determined bacteria.

The bacterial benefits don’t stop there, either.

Kozyrskyj's study also suggests that having pets in the house can reduce the likelihood of transmission of group B strep from mother to child during birth. Group B strep can cause pneumonia in newborns, and is prevented by administering antibiotics during delivery.

These beneficial bacteria can stop the development of group B strep, asthma, allergies, and obesity in children. And you don’t even have to try to transmit them.

It is surmised that the pharmaceutical industry will try to mimic these microbiomes in pill form, just like what they do with probiotics.

Thousands of dogs are given up for adoption every year because people think they can’t have a dog and a baby in the same household. Sadly, many of those dogs never find a home after that; they are euthanized because there are too many dogs in shelters, and not enough homes for them.

So if you’re pregnant or thinking about having a baby, and you’re wondering where your dog fits into the equation – you should keep the dog. The science shows that it may actually be detrimental for your baby’s health if you don’t.

NEXT STUDY: Emotionally Dogs Are Closer to Humans Than Chimps Are