Scientists are uncovering the mystery behind why our pooches can’t get enough of tennis balls. Turns out, it's all due to canine's innate prey instincts that haven't been bred out yet.

Anyone with a ball-obsessed dog has likely asked themselves why their dog loves play with a ball so much. Whether it’s chasing them, retrieving them, or just chewing on them, only a rare few dogs out there don’t enjoy the size, shape and taste of a ball.

“Researchers have even identified what can best be described as an “asking for a ball” bark — produced when a ball is held in front of a dog.”

While the shape and size of a ball may be the reason, since dogs can “sense” it, most professionals believe it might actually be old hunting instincts sneaking back into our domestic pooches. Ball toys are small, oftentimes brightly colored, and when thrown have unpredictable movements—just like birds and rodents.

Though the hunting instinct in dogs has been mostly bred out, there are some things we can’t change about canine companions. One of those is their love of the chase. Unless the dog is a modern working canine with a job—like livestock herding or recreational hunting—they no longer have an organic outlet for their prey instincts. Instead, we create a safe way for them to act on their prey drive through sports like lure coursing, dock jumping, and playing fetch.

Chasing a ball is also a great way for dogs to get their energy out. When we leave our dogs at home to go to work or school, they don’t tend to exercise themselves. Contrary to popular belief, they also don’t exercise themselves when left outside in a yard. So when given the option to play fetch with their owner and get exercise at the same time as affection, they’re happy to take the opportunity for a game of chase.

Going after a ball also feels good and is self-rewarding for a dog. If you have to actively teach your pet to play fetch with commands and treats, he’s probably one of the rare few that doesn’t enjoy it or need it as much as a ball-obsessed dog. There’s no reward system required for playing fetch for a dog that loves the process; the game itself is the reward. They also get to spend one-on-one time with their owners, which is another favorite activity. The entire experience is a positive one.

But some dogs simple aren’t as interested. Hunting breeds like retrievers, pointers, setters, and hounds are more likely to enjoy a rousing game of fetch because they were bred to chase down animals and bring them back to their handlers. More independent dogs, however, like northern breeds (Huskies, Shiba Inu), tend to be less interested in fetching and more interested in doing whatever makes them happy.

Can Balls Help Us Understand A Dog’s Mind? 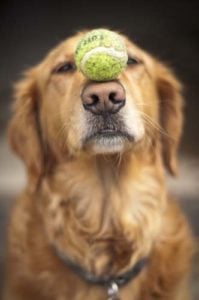 Modern dogs’ love of balls is so widely documented that scientists have actually begun using tennis balls to understand the inner workings of our pooches’ minds. Humans’ drive to understand our dogs is relentless, and experiments are constantly ongoing to figure out how smart dogs are. Balls have been helpers in many of these experiments.

One such study, for example, focused on the problem-solving skills of dogs. Scientists wanted to find out if dogs had the ability to use inferential reasoning, otherwise known as generalization. They hid a ball in one of two containers, then showed the dogs the empty container, and waited to see if they would open the container with the toy in it.

Another study ventured to see if dogs prefer new toys over familiar toys. They used five different objects, two of which were balls, and found that the majority of dogs will choose a new toy over one they’ve already played with.

Researchers have also found that dogs may even have their own “word” for ball. The sound is different for every dog, but when shown a ball most dogs will offer a specific bark that means “please give me the ball!”

It's about the simple pleasures: sometimes a dog needs nothing more than a good tennis ball and their best friend—you—to accompany them during the task.

READ NEXT: The 5 Best Dog Frisbee Brands That Dogs Love to Play With