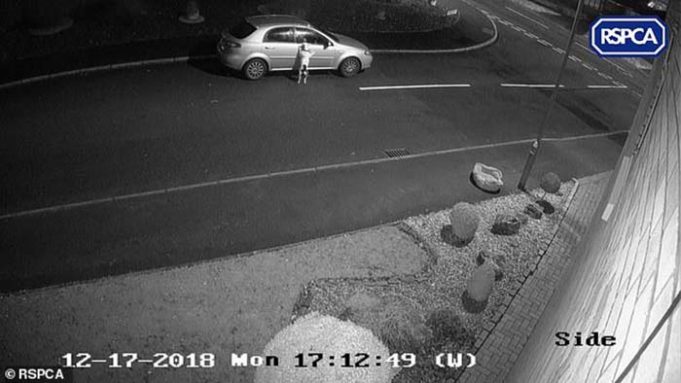 A heartbreaking footage released by RSPCA shows an abandoned dog trying to chase after a car in which the pup was just driven in and left by the road.

In the below video, a man is seen leading a Staffordshire bull terrier to the side of the road, carrying the dog's belongings, dropping them off and running away from the dog to get into a car and promptly drives away.

As the owner drives away, the abandoned dog attempts to chase after him, jumps at the car's window trying to stop the owner from leaving.

Later, the animal was found by the road at that same spot by another passerby. The dog was taken to a local veterinary hospital and the staff contacted Royal Society for the Prevention of Cruelty to Animals (RSPCA) who took the dog in. The dog was named Snoop by the staff.

“The footage has to be seen to be believed – it’s just awful.” – RSPCA

RSPCA then launched an investigation and retrieved the CCTV footage displaying the heartbreaking act. RSPCA inspector Natalie Perehovsky asks the public of Stoke-on-Trent to view the video and provide any information on the owner.

“To see the poor dog in such obvious distress jumping up at the car as it drives away it just heartbreaking,” says Natalie Perehovsky.

She was apalled by the fact that someone can abandon a dog this way on Christmas, and RSPCA are thankful to the good Samaritans who spotted the sad looking dog by the road and brought him to local vets.

At the veterinary clinic, Snoop was observed and they found microchip on him. After scanning, they found two previous owners of the dog; however, the staff does not believe that either of those owners are the man seen in the video footage.

“One man can be seen clearly in the footage dumping the dog, and there is a second person in the driver seat. I am very keen to hear from anyone who recognises the vehicle, the man or the dog,” says Natalie Perehovsky.

If you have any information on the dog or the owner, please contact your local RSPCA branch to provide any details that could help the investigation.