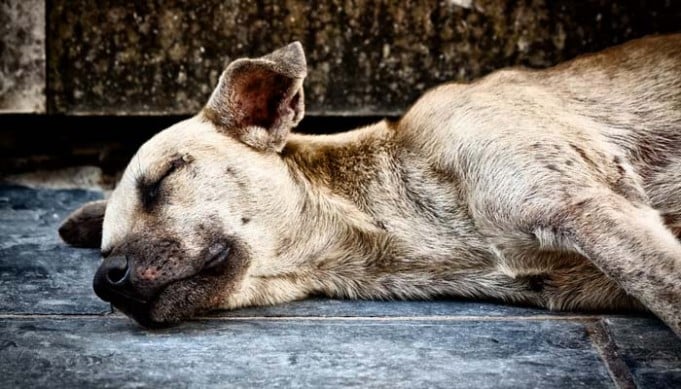 Greater Manchester in Northern England has seen several cases of poisoning during the summer. A common theme has been bags of chicken being mixed with slug pellets and left in areas that dogs visit.

The latest incident occurred this week in Wythenshawe when a 7 year old German Shepherd, who had suffered internal bleeding before the weekend, collapsed and died.

Buster first fell ill after one of his daily walks in the park 2 weeks ago. His owners said that he needed to urinate a lot and was drinking more than usual so they took him to the vet.

The vet thought a bacterial infection was the most likely cause but blood tests came back clear. The vet gave Buster antibiotics. Later tests also came back clear after another trip to the vet but unfortunately Buster died suddenly later that day.

The vet said that Buster suffered internal bleeding and mass organ failure. He added that it is highly likely that he was poisoned.

Last week there were reports of chicken mixed with slug pellets being dumped in the area.

A 10 month old puppy was poisoned after eating an unknown substance. She survived. Fortunately for the Miniature Schnauzer her owner, Janine, is a toxicologist and recognised the symptoms. The dog was taken to the vets immediately.

In July a German Shepherd, Sheeba, died after eating poison that was thrown into her owner's fenced garden. Sheeba had been the best friend of an autistic boy.

She had to be put to sleep when the poisoned food left her with erupted internal organs.

What reasons could there be for poisoning dogs?

In 1937 upper class Mrs Juliet Tuttle was driven round in chauffeur driven cars while she poisoned dogs in their own gardens.

Apparently 75% of animal poisoning is aimed at dogs. Larger breeds are most likely to targeted.

It's possible that the poisoner has been affected by the behavior of neighborhood dogs. This could explain why a dog would be poisoned in its own back yard as their grievance is likely to be aimed at a particular animal. A dog barking at night can disrupt sleep and in particularly serious cases prevent sleep. When someone is sleep deprived their thought process can be dramatically affected and obsession can set in.

The dog causing a problem to a neighbor can soon be seen as a pest first and a dog second. I find it hard to accept that anyone who owns a dog could poison another person's pet. Of course the vast majority of people live within earshot of a noisy dog but would never even consider killing the animal.

Where the poisoner targets dogs in general the reasons are a little harder to fathom. Investigations have suggested that the poisoner is a person that does not like to confront the owner of the dog and probably has no faith in the police or other authorities to help them with their problem.

In 1937 upper class Mrs Juliet Tuttle was driven round in chauffeur driven cars while she poisoned dogs in their own gardens, as told by Dogster. She apparently targeted animals that were not being properly cared for! Mrs Tuttle was a wealthy widow who regularly made donations to humane charities.

It is also suggested that a person who might use poison would be unlikely to physically hurt an animal. They would never hit a cat with a shovel for example! By using poison they don't have to be around to witness the suffering that they cause, not only to the animal but also to the family that has to deal with the loss of a much loved member of the family.

Thankfully it is relatively rare but what steps can we take to limit the danger to our own animals?

Try not to allow your dog to eat anything on the floor during walks. Obviously this can be difficult especially if you have your dog off lead. A reliable “Leave!” command is essential for any dog owner.

If poisoned food is thrown into our own back yard it can be difficult to stop the dog eating it. We can't watch them every second while they are out there.

Prevention can be better than cure.

I try to keep my dogs as quiet as I can but dogs bark! Try to bear in mind what effect your dog may have on your neighbours. I would imagine it would have to be pretty extreme barking for it to drive someone to poison it. Remember, some people work nights and are trying to sleep during the day.

Hopefully we never have to go through that agony ourselves but my heart goes out to those of you who have had to.

Do any of you have any stories to share about your pet being poisoned?