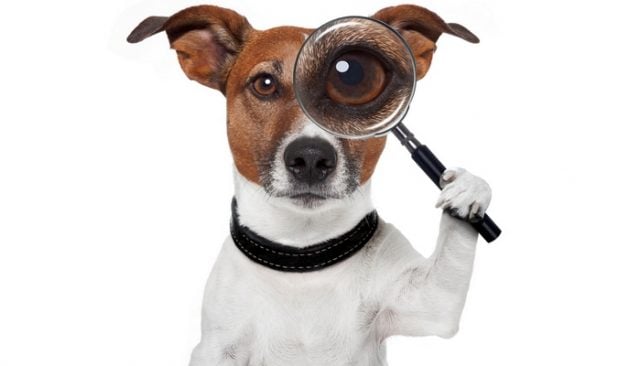 This is a case of the runaway dog that went missing from his owner since the fall of 2014. He was practically uncatchable. Each time a trap was set for him, he would squeeze just a little of his upper body into the trap -just enough to take away the bait – while holding back the rest of his body outside the cage, and then he’s gone.

This went on for days, until the dog's quick-wittedness in evading every possible entrapment (which got him fed, by the way) compelled animal control officers (ACO) in West Warwick, RI to bring in Sheilah Graham for some much needed help. This was in February 2015, when Rhode Island was besieged with a severe snowstorm.

Sheilah Graham is from Rhode Island and works at the U.S. Department of Homeland Security. In her free time, she volunteers in recovering lost and missing animals. She’s cracked over 70 cases, including one which needed her to drive over a thousand miles just to reunite a dog with his owner.

Recovering lost animals has become Graham’s craft, which she has become very good at – entrapping the notoriously uncatchable runaways, like in this case. With the help of a friend, Shannon Napolitano, she immediately set up surveillance cameras to study the dog’s every movement. The pair devised plans as to the kind of trap to use.

They called the sly dog Murphy – suggestive of Murphy’s Law – since everything the ACOs tried early on, as well as Graham’s team’s initial efforts, had always gone wrong. The plate triggered, the bait  was gone, but no Murphy!

They had to strategize and make improvisations on their entrapment methods, and fast.

They decided on combining two traps of the same size using two strong cable locks to latch them together. The objective was to force the dog to go deeper inside to get to the bait. Next, they strung up a line to a nearby homeowner’s back porch that would trip the trap door shut, and a live video feed was set up at the porch that would monitor the trap.

Even with this elaborate scheme, the team suffered three failed attempts at cutting the line because they had trouble getting the right angle at first. They had to re-condition Murphy to adapt to the trap by allowing him in and out for a couple of days, while slowly reducing his feedings to get him hungry and more cooperative.

On the day that he was to be entrapped, Murphy warily entered the trap three times – each time keeping his lower back outside. But on the fourth try, he went all the way in. They cut the line and the door slammed shut on him. Finally, Murphy was in their hands safe and sound.

At the West Warwick Animal Shelter where Murphy was later brought, his microchip was traced to an owner who, subsequently, called in to confirm that he had been missing the dog – actually called Phillip, since November 2014. The story ends with another joyful reunion for man and dog – the best of friends.

The commitment that Graham and the other volunteers have in bringing lost dogs to their owners is incredible. They stop at nothing – not the harsh weather, not even an unbelievably evasive dog like Murphy. This operation alone required over 2,000 photos of the dog, painstaking surveillance and an awesome network of people willing to contribute time, talent and resources to bring home a lost furry soul.