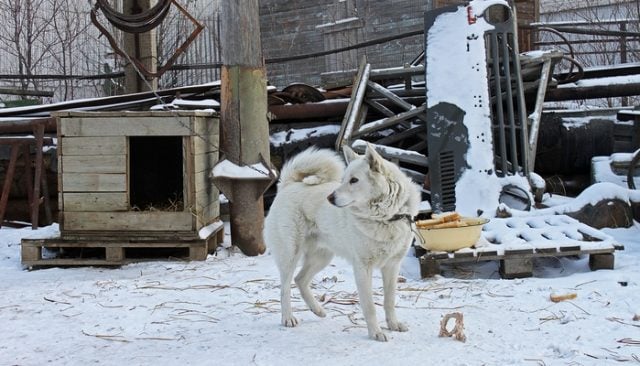 Upon learning about an elderly dog who had been tied up on a chain for the past 15 years, a Long Island rescue group came to his aid, cut his chain, and set him free. Wait until you see his reaction to being free for the first time in his life!

Bear had been chained up outside, never being allowed off his chain. He was forced to endure the harsh New York winters. Though he is a large dog with a thick coat, New York winters are bitterly cold and oftentimes deadly for those stuck outside.

Thankfully, Bear has now been relocated to the Guardians of Rescue shelter facility, and will never have to be stuck out in the harsh elements again. For the first time ever, Bear will start to encounter love and affection from humans, instead of cruelty and neglect.

Despite the horrific conditions Bear has been living under all these years, his former owner has not yet been charged with animal cruelty. After the rescue workers arrived and cut his chain, Bear’s first stop was a doggy spa. There, he was gently groomed and even got to swim in the indoor doggy pool!

After that, he got to go to Petco and choose his first toy, and got some doggy ice cream, too. Bear’s next taste of freedom was the beach. Rescuers promptly took him there, and Bear had a blast.

Bear’s next trip is to be a one-way ticket to his forever home. Guardians of Rescue is actively looking for someone to adopt Bear and show him love and warmth for the rest of his days.

The rescue’s president, Robert Misseri, attributes Bear’s lucky twist of fate to nothing more than a concerned phone call from a member of the community. He made it clear that his organization and others exist to help animals, but they cannot accomplish much without the help of the community around them.

Bear has had a lonely and cruel life, but more important than that is that he will spend the rest of that life being loved and cared for. That matters more than all the rest.

If you see animal cruelty or neglect happening in your community, reach out to local rescue groups. They have the resources and knowledge to act, but they need you to bring situations to their attention. Bear’s story shows us that we can save a life and change the outcome forever, with nothing more than a phone call.

RECOMMENDED: 15 Mistakes Even the Best Dog Owners Can Make