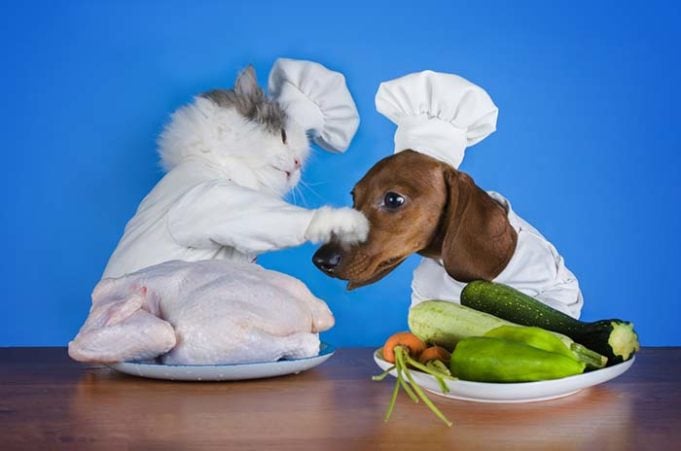 We thought that our dogs and cats love high protein meals the best, but new research findings say that is not the case at all. Scientists also found that official dietary requirements of pets must be adjusted.

A recent study is challenging expert recommendations about the optimal diet needs of our pets and particularly their expectations. Up to this day, veterinarians would commonly agree that our domesticated animals, especially cats, normally prefer protein-rich foods, but that's apparently not the case according to new findings.

“Some experts have thought cats need diets that are 40 or 50 percent protein. Our findings are quite different than the numbers used in marketing and are going to really challenge the pet food industry.”

Researchers at the Oregon State University's Carlson College of Veterinary Medicine learned that cats want high carbohydrate meals more than high protein meals. Dogs, on the other hand, like high-fat food more than anything else. Their findings were published in the Journal of Experimental Biology.

Four Types of Food Choices for Dogs and Cats

For 28 days, the experts controlled the food intake of 17 adult dogs and 27 cats. The subjects were given four types of food that tasted the same. The choices included: balanced food, high-fat food, high protein food and high carbohydrates food.

The dogs were given just an hour a day to eat any of the four choices and their intake was monitored. The cats weren't allowed to overeat as well, but the researchers gave the felines unlimited access to the food 24/7.

The pets’ food bowls placements were regularly changed as well to prevent bias against bowl position, which could impact the results. The researchers wanted to see which type of food the dogs or cats would pick based on signals from their body, and not because of the food's flavor or palatability.

The findings showed that cats preferred to consume carbohydrates (43 percent) more than protein (30 percent) when the flavor was removed from the equation. However, when the experts increased the amount of protein in their food, the cats reduced their intake of fat and carbohydrates. There was no effect in the cats' preference to eat more carbohydrates when their diet had more fat content.

“Because the choice of macronutrients was influenced in both dogs and cats by age and either lean body mass or fat body mass, that suggests a physiological basis for what they chose to eat.”

Dogs, on the other hand, preferred to consume fat more (41 percent) than carbohydrates (36 percent). Their intake of fat also increased when more protein was added to their food. Their carbohydrates intake, unlike the cats, did not change.

While low fat dog foods are sometimes needed, dogs are not big fans of them. Carnivores usually prefer a diet rich in protein and fat but the domestication of pets over centuries changed this preference to become increasingly interested in high carbohydrates as well. But cats, despite their evolution and domestication, apparently maintained their preference for high protein and are pickier with their food choices than dogs. Hence, vets recommend giving cats high protein meals regularly.

But this study highlighted the preference of cats for high carbohydrates with lessened palatability in food. Study author Jean Hall said in their press release that the pets’ choices had physiological basis as well. Cats, by nature, don't have the tendency to overeat despite having more sensitive receptors to amino acids (protein). Instead, they adjust their diet based on their body's signals for the needed macronutrients and not palatability.

The taste buds of dogs and cats are similar to humans and palatability in food impacts our consumption. The way food smells or tastes, or even its presentation, satiate us temporarily.

Food's long-term effects, such as the nutrients we gain or the intolerance or allergies we develop from eating specific meals, affect our preferences physiologically, too. Companies that manufacture processed dog or cat food are aware of the short-term impact of palatability and because this can be easily achieved, manufacturers often disregard the long-term effects of their recipes.

This study also highlights how humans, whose food choices are more like dogs, can learn thing for two from cats when it comes to diet.

Swimmer Puppy Syndrome: How to Help Your Dog

11 Things I’ve Learned from Being a Dog Owner

Alina Rai - Aug 20, 2020
You pick up plenty of insights about life when you're in the company of dogs. They make great teachers of love, gratitude, compassion and...

9 Reasons CBD Is Good For Dogs And How To Give...

Alina Rai - Aug 18, 2020
⁴There are a lot of dog-related websites out there, so information about our canine friends is abundant. Navigating around all those websites can be...