We know that dog fighting is illegal, but some people still believe that it shouldn’t be. What exactly goes into training fighting canines? Which breeds are used in these fights? Is the training harsh? In this article, we take a look into the violent but sometimes lucrative industry of fighting dogs. 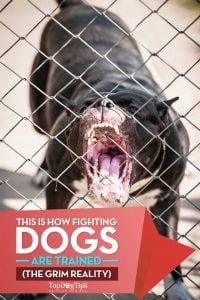 Dog fighting is a felony in all 50 US states, as well as Puerto Rico, Virgin Islands, Guam and District of Columbia. In 2014, Barack Obama signed the Farm Bill (U.S. H.R. 366/S. 666; PDF) which made even attending animal fighting events illegal. This practice is often closely related to other illegal activities with dog fighters involved in organized crime.

Sadly, it's still common practice in some parts of the world. Likewise, its felony status has not ended dog fighting in the U.S entirely either. There are still fights occurring all over the country, as some cultures have long histories of dog fighting. Dog fighting is viewed as one of the most cruel types of animal abuse, not only because of the events these animals are forced to attend but also because the dog will suffer throughout his whole life.

Dogs are trained for fighting from the very early age. But before the training even begins, there is breeding. Fighting dogs have been bred over centuries with the most vicious dogs commanding the highest prices for their offspring. While most people can recognize a pit bull as a fighting dog right off, fewer know that there are many other popular “fighting dog breeds“, including Dalmatians, which are bred and used as fighting dogs.

How Fighting Dogs Are Trained: The Grim Reality 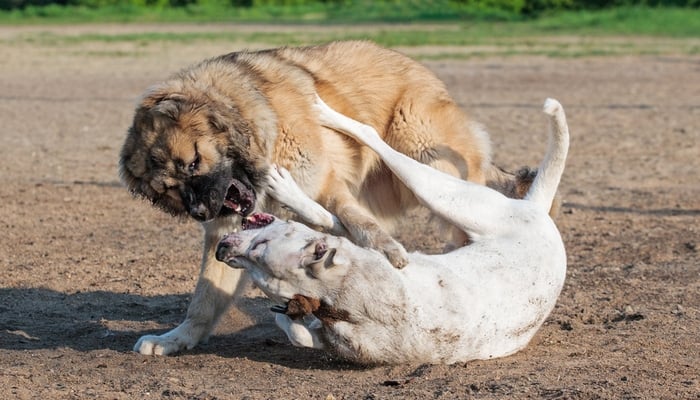 Any dog with size and muscle can make a successful fight dog. When breeding dogs for fighting, some puppies will not have as good of a fighting instinct as their litter mates; these dogs are then used as “bait dogs” to train the fighters.

Many dogs and puppies given away for free also end up as bait dogs. People who train fighting dogs and arrange these illegal events will often put up online ads on sites like Craigslist looking to adopt dogs, or seek out other pet owners who avoid bringing their pets to shelters and instead are hoping to give them away for no charge, fast. These bait dogs are also commonly stolen pets.

In 2004, National Geographic published an article about stolen dogs who were likely to be used as bait animals. According to their investigation, in just six months thousands of dogs will go missing just in Pima County, Arizona alone, and they suspect that at least half of those were stolen.

The life of a bait dog is a cruel one. He is used, repeatedly, to train fight dogs the commands and fighting techniques they need to know. This continues until the bait dog is finally dead or sustained injuries that doesn't allow him to do “the job” anymore. A bait dog can be kept alive for several training sessions, but when his usefulness is over, he will be given to a fight dog for a kill, or will be drowned or strangled by the owners.

The mouth of bait dogs are usually tapped shut so they cannot bite the more valuable fighting dog. A bait dog experiences broken bones, severe lacerations and other injuries until his short life mercifully comes to an end. Occasionally, other pets like cats or rabbits will also be used as bait animals for training fighting dogs.

“The Bait Dog” from National Geographic:

Fighting dogs are usually kept on heavy chains to build upper body strength. They will be kept very close to one another, but on chains that are never long enough for the dogs to reach each other. They are close enough, however, to antagonize the others, but never to get the emotional release of the fight.

Dog trainers also use canine treadmills or other apparatus to walk the dogs and build their cardiovascular health. Many times cats, rabbits and bait dogs will be used to lure the dogs around a running pen. After the exercise is complete, the dogs will be given the lure to kill.

While there are breeds that have been long bred for fighting, dog fighters will continue to build up the muscle, strength and overall size of these dogs through bulking diets and exercise regimes. Dogs are also given steroids and other supplements to speed up the process. These steroids can also increase aggression in the dog. Because fight dogs are injured very often, they will also be given antibiotics to speed up the healing.

In most cases, because fighting dogs are disposable, their wounds are often not properly cared for, as that will cost more money. It's cheaper for the dog fighter to find another animal to use. Fighting dogs also cannot be taken to a vet due the illegal nature of what they are forced to do. Veterinarians would likely report the owner to the authorities. Thus these dogs are often euthanized. 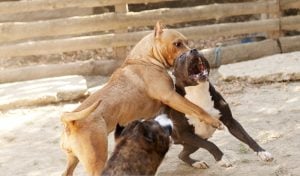 In the infamous case of NFL Quarterback Michael Vick who staged dog fighting events, more details about the process of training fight dogs and their treatment were revealed.

Instead of reward based dog training methods (positive reinforcement), fighting dogs are often abused when they do not perform as expected. This keeps the trainer set up as the absolute boss in the dog's mind (the now obsolete “alpha dog” training mentality). Abuse also makes a dog more angry and vicious.

A fighting dog is never shown love and affection. They must always look at the trainer as the boss and never as a friend or equal. Fight dogs are raised as machines, not as pets.  Any sign of meekness or mercy is negative in a fight dog. If a dog is too friendly, it will be killed or used as a bait dog.

Starvation is a common practice as a hungry dog is a desperate dog. Desperate dogs have the capability for more anger. While food must be given to keep the dog alive, it is measured out carefully to avoid fullness and keep the dogs hungry, in both senses of this word. A full dog is a content dog. A content dog is a docile dog. These dogs will often be well fed to make muscle, but starved in the couple of days leading up to the fight to foster aggression.

Dog fighters often look for statistically “scary” dogs as those breeds are often stronger and may be genetically predisposed to aggression. Fight dogs must be smart and obedient. They will learn commands such as stop, come, and attack. Many of these commands are given as hand signals. Dogs are also socialized around people, to some extent, to keep them from getting startled by the crowds during to fight.

Dogs that don't make the cut

Dog fighters will choose the breeds carefully, and often go after banned dog breeds that are now illegal to own in some countries because of their breeding and dog fighting history. A fight dog will usually have at least two test fights before two years of age, with under-performing dogs becoming bait dogs. Dog fights often last until death, with even winning dogs succumbing to injuries.

Investigators from the Michael Vick case revealed more grim details about what happens to these animals after training or fights. In most cases, when the fight dog or bait dog becomes useless, owners will kill dogs by drowning, electrocution, beating, or euthanasia. Sometimes a dog just stops fighting and can’t go anymore due to injuries, and unless this dog can command champion breeding fees, it will also be killed.

Why do people still do it?

There is a lot of money in dog fighting. ASPCA and other sources report that anywhere from $20,000 – $30,000 can be made from a single dog fight. If you have a champion fighting dog that survives many fights, people will pay big money for the privilege of breeding their female dog with him. Also, the gambling involved in the “sport” brings in high payouts to winners and bookies alike.

Dog fighting is a criminal act that appeals to people in criminal organizations and gangs. In countries where it is still legal (such as Russia, Japan, Honduras and some others, according to AnimalLaw), it is considered a sport like any other. However, through education and awareness, activists around the world are hoping to ban this cruel “sport” every country.