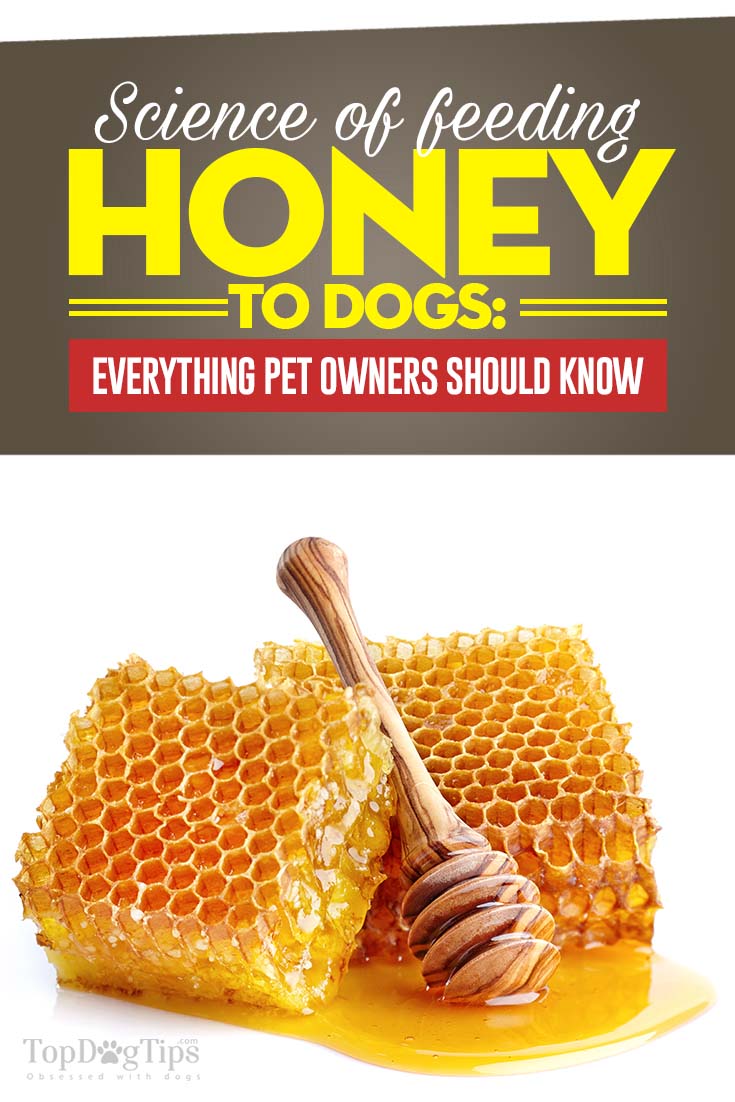 Used by humans in a wide variety of forms, honey is a natural source of sugar, and now dog owners are looking to see if honey can provide the same benefits to their canines. But, what does honey for dogs really do? Is it safe? Is it even effective? Let's find out!

Several species of bees have been known to produce honey by foraging nectar from various sugar-rich flowers and plants. The nectar is consumed, digested, regurgitated and stored as honey in combs for later digestion.

The clarity, color, viscosity and flavor of the honey often depends on the type of flower that the bee gathers nectar from. For example, when bees have access to Canola the resulting honey is very delicate and displays a white color. Unsurprisingly, when gathering nectar from lavender fields, the honey produced has a distinct lavender scent and shows a medium amber color.

In the modern age, beekeepers keep hives and use smoke to pacify the bees before moving in to collect the honeycombs. A layer of wax must first be removed before the honey can be extracted and filtered.

Raw, unprocessed honey is much different than the honey that you can buy at the grocery store that comes in the little bear-shaped bottle. There are ingredients added to commercial honey to change the taste and consistency, as well as make it last longer.

If you're looking for the best type of honey for dogs, finding raw, local honey is a must. Because bees collect honey from plants in the local area, there will be pollen nectar in the honey from plants in your region. Don't worry, we're going to cover this in more detail in just a moment.

MORE: 6 Uses and Health Benefits of Feeding Honey to Dogs

Honey for Dogs
The Science-based Guide for Dog Owners 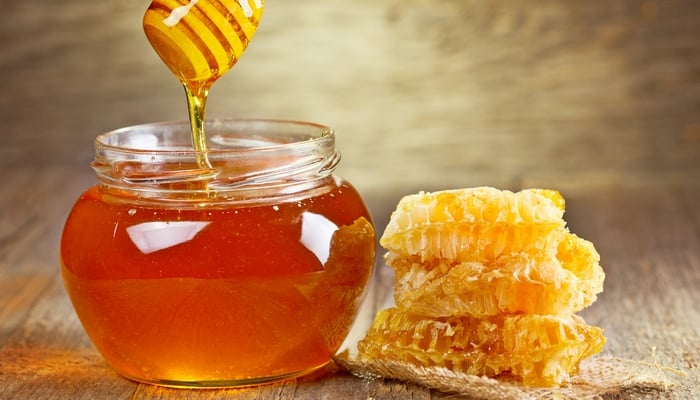 Human Use of Honey

To gain a better understanding of how honey can be used for dogs, let us first review on how we as humans use the substance known in ancient times as the “nectar and ambrosia of the gods”. Cave paintings in Spain are evidence that humans have collected and used honey for over 8,000 years (Pager, 2015).

However, it wasn’t until the days of ancient Egypt until honeybees were kept and honey was harvested. Initially gathered as a food source, it wasn’t too long before the preservative qualities were discovered.

Due to the lack of oxygen within its crystal matrix, honey was used to preserve various fruits, plant matter and even animal tissue for years at a time. Honey has since been harvested and employed in everything from treating sore throats to skin care. 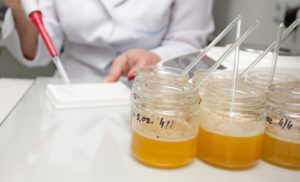 Used in eastern medicine for centuries, particularly in Chinese and Ayurvedic practices, honey was found to be especially useful in the treatment of gastric ailments. There are several factors as to why this is, however the most likely cause is its effects of gut flora.

However, it has also been noted that a significant amount of honey must be consumed before a noticeable change in population is observed (Strickling et al. 2000). When mixed with a combination of beeswax and olive oil, honey has been shown to accelerate the healing of burns and wounds.

Attributed to its high osmolarity, honey allows for the flow of solutions through the cell walls. This decreases inflammation in wounds and sores by moving fluid out of the wound site. This also decreases the efficacy of bacteria and compromises their cell structure.

So, why is it so important to gain an understanding of how honey can impact humans? Due to the similarities in their digestion and absorption systems, dogs are often used as human models when studying these systems in experiments and research (Kararli, 1995).

Topical Use of Honey for Dogs

When it comes to honey for dogs, topical application is shown to be the most common use. As in human studies, honey is often used to treat burns and wounds (Jalali et al. 2007). Yemen produced Sidr honey has been shown to treat contaminated wounds in the same time span as iodine. Further research into the effects of Sidr honey displayed the added benefit of healing wounds of full thickness (Hananeh et al. 2015).

On a similar vein, non-boiled honey from West Azerbaijan has shown great potential in being an effective healer of surgical wounds (Goharshenasan et al. 2016). Honey used in these ways provides an alternative for those lacking the necessary medical supplies or for those who experience adverse/allergic reactions to conventional antiseptics.

Since its introduction into the mainstream, medical grade honey (MediHoneyTM) has seen quite a bit of use in both humans and canines (Robson et al. 2009). Derived from the Teatree (Leptospermum) plant of New Zealand, MediHoneyTM was approved for use in 2008. While its use is mainly seen in clinical settings the results have been promising.

Also, while new products are being created and marketed for this sector, only a handful of them have been effective.

Of note, medical grade honey has successfully demonstrated its effectiveness at treating canine otitis externa – an inflammation or infection of the external ear canal – in both lab and clinical settings (Maruhashi et al. 2016). However, since it is relatively new to the mainstream medical world, many researchers and doctors warn that the jury is still out when it comes to the use of medical honey against bacterial skin infections.

Beware snake oil merchants (or would it be bee honey merchants in this case) that claim their particular brand of honey has curative effects unseen anywhere else. These claims are usually unsubstantiated and have no scientific literature backing them.  If it seems too good to be true, it likely is.

Honey for Dogs as an Ingestible 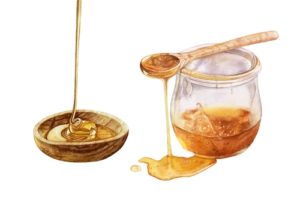 The most common use of honey in the dog world is in the manufacturing of dog food. According to Google patent database, often used as a sweetener and binder, honey offers a more natural way of delivering sugars while foregoing the use of highly manufactured fillers in the feed.

The most promising internal application of honey revolves around kynurenic acid (KYNA) (Turski et al. 2013). KYNA, a known antiexcitotoxic and anticonvulsant, is used in the treatment of neurobiological disorders. Among all analyzed foods, honey has been shown to contain the highest levels of kynurenic acid (Urbanska et al. 2014)

It is due to this that honey is praised for its neuroprotective properties.

So much so that KYNA is currently used in the treatment of brain disorders centered around neuronal loss. During studies involving experimental colon obstruction KYNA was introduced to dogs and showed the ability to inhibit hypermotility and xanthine oxidase activity during (Kaszaki et al. 2008). KYNA exerts a protective, anti-inflammatory effect.

So not only does KYNA effectively decrease abnormal movement of the intestinal tract, which would have caused great pain and may have led to tearing of the intestinal wall. But, KYNA also prevented the release and spread of destructive superoxides.

As an added bonus, KYNA aids the healing process by decreasing the inflammation often associated with injury and infection. This decreases the discomfort felt by the dog and allows treatment without negative feedback from the subject.

When combined with glutamine, it has been shown that honey may provide a viable alternate treatment for short bowel syndrome in dogs (Eyarefe et al. 2012). For canines that underwent some sort of surgery to decrease the length of their intestinal tract, the probiotic promoting properties of honey for dogs allows them to increase the amount of nutrient absorbed.  This has dire ramifications in terms of maintaining health for the dog.

READ NEXT: 15 Cheap Ways To Prevent Most Common Health Issues In Dogs 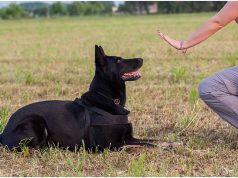 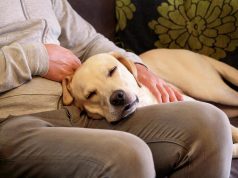 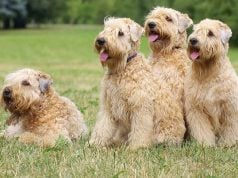 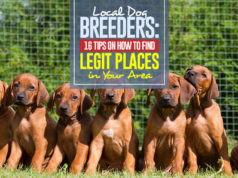 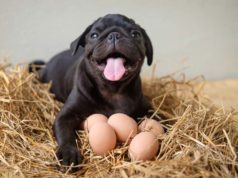 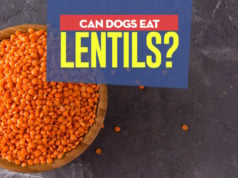 Lentils for Dogs: Can They Eat Them?

Kelly Pebworth - May 14, 2021
Reward-Based Training adds something pleasant immediately after a behavior appears to reward the behavior and reinforce its learning. This type of training is a...

Cody Griffin - May 14, 2021
Dogs are both social and sentimental animals. They receive the love of their masters and express theirs in their own language. They jump on...

Kelly Pebworth - May 14, 2021
As a pure-bred terrier, the soft coated wheaten terrier originated in Ireland. It will typically have two coats: the heavy coat (American) or the...

16 Tips on How to Find and Pick Local Dog Breeders...

Camden Savage - May 13, 2021
Many future pet owners prefer getting purebred dogs and find local dog breeders with that purpose. There are plenty of reasons one may desire...

Rachael Leanny - May 13, 2021
With a long list of human foods that we should never give our dogs, such as almonds, grapes, and chocolate, eggs are actually great...

Rachael Leanny - May 10, 2021
A dog throwing up white foam can either be due to some mild reasons or more serious causes. Hopefully, it's only a digestive problem, such...