Home Dog Care My Dog Has a Runny Nose: 5 Things to Do 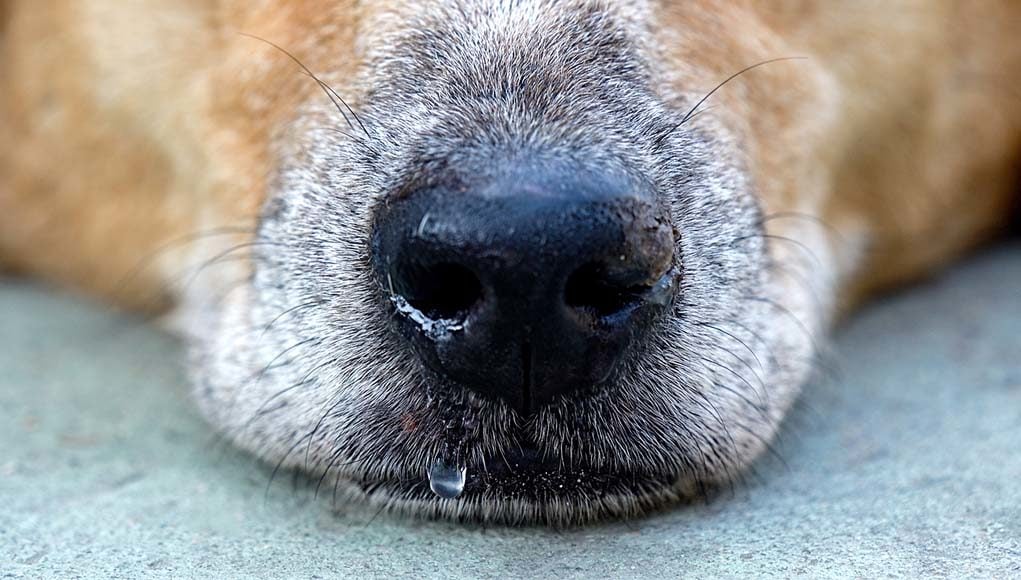 A dog’s nose is an essential part of its body. Dogs see the world through their noses.

When a dog’s nose isn’t functioning as well as it should be, for example, if it is running more than it should be, it could be affecting a dog's quality of life.

Here, we'll take a look at a dog's runny nose and panting and five things you can do to help your pup.

In this article, we will address:

The Importance of a Dog’s Nose

Did you know that a dog has up to 300 million olfactory receptors in its nose?

For comparison, humans only have 6 million. The area of a dog’s brain that interprets these is 40 times larger than our own. The scent is a big deal for your dog.

Dogs use their noses to gather information about people, other dogs, and their environment to help them understand and survive in the world they inhabit.

Dogs don’t only use their noses to smell things. A dog uses their nose to breathe, just like we do. Although the way a dog’s nose functions when breathing is quite different from how a human nose functions.

A dog has the ability to take air in and breathe it out at the same time, which creates a continuous circulation of air.

The complex way a dog’s nose functions can be significantly impaired if it becomes blocked or has an excess of nasal discharge.

So if you find yourself asking, my dog has a runny nose, and you're not sure why below are some possible reasons.

Why is My Dog's Nose Running?

Dogs have naturally wet noses. A dog likes to keep their nose moist as the moisture increases its ability to pick up more scents from the environment.

In fact, sometimes, if your dog’s nose is dry, you may have cause for concern, as it can be a sign of dehydration or illness.

Most of the time, the wetness of a dog’s nose can vary from dog to dog, though, and there is little need for concern.

BUT if you're noticing that your dog's nose is more moist and you're asking, “why is my dogs nose running” then it could be something out of the ordinary. If this is you, then you may have reason to be worried. Below are the most common reasons your dog’s nose could be running.

Examples of irritants include dust, smoke, perfume, incense, and cleaning products. Remember that a dog’s nose is susceptible.

These strong scents may be overwhelming for your pet and be the cause of the nasal discharge.

At certain times of the year, more allergens in the air can affect a dog. For example, pollen.

While most pet owners expect dogs to show allergic reactions in spring and summer, winter allergies aren't that rare either and can often cause runny noses in dogs. 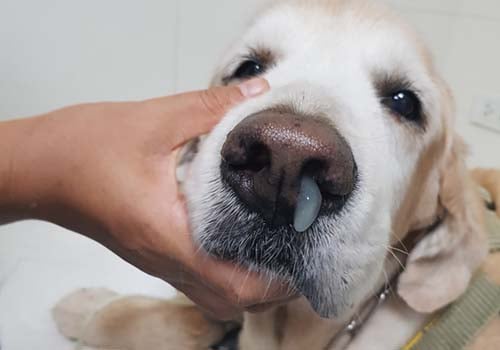 Dog's Runny Nose Can Be Caused by An Infection

An upper respiratory infection is the most likely cause of your dog’s running nose, especially if they are over-exerting themselves with activity.

Nasal discharge (PDF) is a common symptom when a viral and bacterial infection occurs together, potentially resulting in kennel cough.

If your dog is coughing as well as having a runny nose, you should take them to see a veterinarian.

Infected dogs are contagious and should be isolated from other dogs for a few weeks to prevent the spread of the disease.

Dogs don’t sweat as humans do. Instead, they cool down by panting and sweating small amounts through the pads of their paws and noses.

If your dog’s nose appears to be overly wet, your dog may essentially be sweating out of its nose to cool down, and it's not actually a dog runny nose.

A tell-tale sign is if your dog is also panting heavily, as this is another way for them to regulate their body temperature.

A more serious cause for your dog’s runny nose is an obstruction. If your pet has inhaled something, such as grass seeds, then you may see a nasal discharge.

Alternatively, toxins that your dog has inhaled may be affecting them as well and causing the nose to run.

One of the most common respiratory conditions in dogs is rhinitis and sinusitis. These can often cause runny noses in dogs, heavy nasal discharge, and breathing problems.

Moreover, while very rare, a dog’s runny nose may be caused by an even more serious underlying condition, such as dental problems, blood clotting disorders, or even nasal cancer.

If all of the above-mentioned causes have been ruled out, your vet will need to investigate this further.

My Dog Has a Runny Nose: 5 Things You Can Do

When you are concerned about a dog’s health or safety, always consult a veterinarian so that they can rule out the more serious potential causes of your dog’s runny nose.

Never hesitate to take them down to a clinic, even if it is just for a runny nose.

In the meantime, here are five things you can do immediately to help alleviate your dog’s runny nose symptoms and minimize any discomfort your pet could be experiencing due to nasal discharge.

1. Observe Your Dog for Other Symptoms

Check to see if your pooch is experiencing any other symptoms other than the dog runny nose that could give you a clue as to what the problem might be.

If you find that the dog seems happy and healthy and is not acting out of the ordinary, aside from a dog's runny nose, at least you will know that there is no need to panic.

Things to look out for include: a lack of appetite, coughing, strange discharge, or blood.

2. What to Do If Your Dog’s Nose Is Bleeding

If you notice blood (PDF) coming out alongside regular nasal discharge, hold the dog’s head back and hold a tissue, towel, cloth, or anything absorbent to the nose to control the bleeding if it's heavy.

You can also apply a cold compress to the top of a dog’s nose between the eyes and the nostrils. However, do not insert anything into the dog's nostril.

It would help if you then got your dog to the vet immediately.

3. Avoid Allergy Triggers That Cause a Dog Runny Nose

If you are lucky enough to know that your dog has an allergy or sensitivity to certain irritants, then you can reduce your dog’s exposure to these things.

This might mean not smoking or burning strong candles or incense around your dog and ensuring that their bed or crate is well ventilated.

Typical signs that your dog is experiencing allergies are sneezing and coughing, eye discharge, a runny nose, breathing problems, and itchy skin.

4. What to Do If Your Dog Has Inhaled an Object

A sign that your dog’s runny nose is due to them inhaling something, like a blade of grass or a seed, is when the discharge only seems to be coming out of one nostril.

That is a clue that one nostril only is blocked.

Alternatively, if you can see it and your dog is calm and patient, perhaps you have a friend with you to soothe or hold the dog, then you can attempt to remove the object carefully with a pair of tweezers.

Do not attempt this if the object is large or further up in the nostril. If your dog jerks, you could injure them or make the problem worse.

5. Take Your Dog for a Vet Check-Up if your Dog's nose is dripping

Even if you think you have solved the problem, for example, by removing an obstruction from the dog's nostril, you should still follow up with a vet to check if your dog needs antibiotics to prevent infection.

Visiting your veterinarian and getting the advice of a professional about a dog's runny nose, prevention, and future treatment will always give you peace of mind, knowing that you have done and will be able to do all that you can for your pet.

Best Treatments and Tools for a Dog Runny Nose

Some natural treatments are developed specifically for dogs with a runny nose, sneezing, congestion, upper respiratory issues, and sinus relief.

There are also tools commonly used to unclog a dog's nose with an object stuck in it. Here are some of our favorites we've tried in the past.

My Dog Has a Runny Nose: Final Thoughts

A runny nose in dogs might not seem like a big deal to you; we see children with runny noses all of the time.

However, it could be a sign that something more serious is wrong with your dog. Always pay attention and never ignore when your pet is acting out of the ordinary, and you might be able to prevent something bad from escalating.

READ NEXT: 5 Best Remedies for Dog’s Dry or Itchy Nose 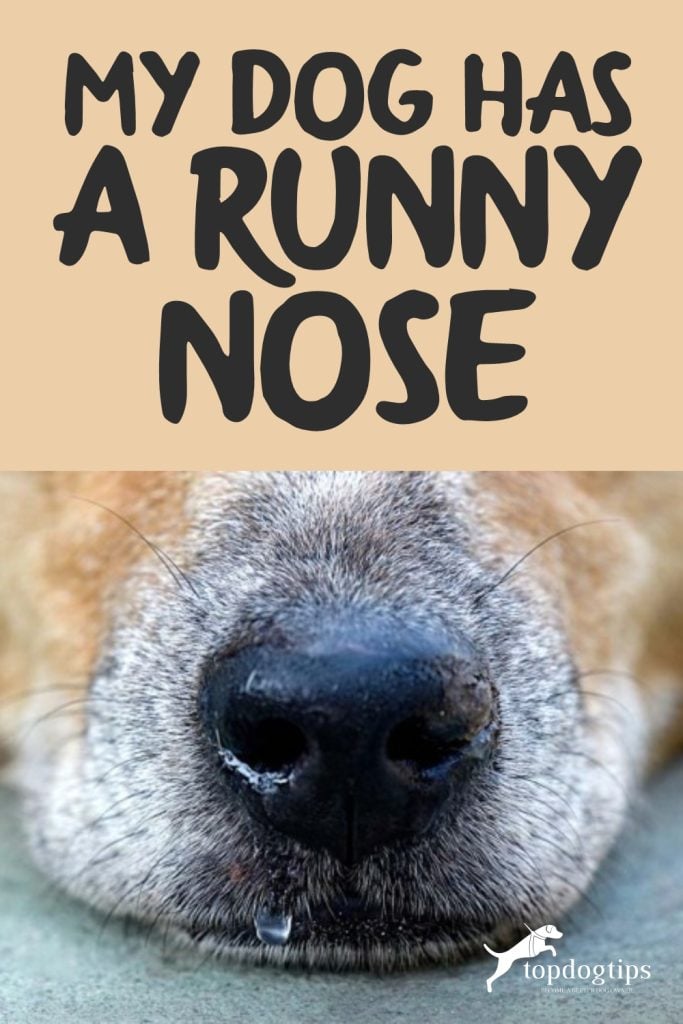