Some may believe that the feeling of anxiety is confined only to humans.  They would be wrong. The feeling of worry, nervousness and unease extends to man’s best friend as well. If your Fido suffers from this condition, learning to relieve anxiety in dogs with these science-based methods will make life much easier for you and your pup.

Dogs have been observed to display the same kinds of behavior and actions associated with humans suffering anxiety attacks. And, much like humans, certain protocols, treatments and actions can be done to decrease or even do away with effects of anxiety.

Many owners don't even realize that their dog has anxiety. If you notice signs like:

…your dog may be suffering from anxiety. Certain types of anxiety in dogs, like the infamous separation anxiety, are easy to figure out. When you leave the house, your dog becomes anxious and may bark, howl or become destructive. Sometimes, this can be relieved with simple dog anxiety vest, petting and spending time with a dog, or going the over the counter dog anxiety aids route.

But other triggers of anxiety in dogs may be more difficult to pinpoint, and even harder to deal with and relieve in canines. Regardless of what may be causing the issue, you need to know how to relieve anxiety in dogs in order to help your pooch. In this article, I'm listing ten of the best methods that have science-based roots and have been proven to work, so it is very likely that one or more will work  to help ease your dog's anxiety too.

RELATED: 4 Factors That Cause Anxiety In Dogs (According To Research) 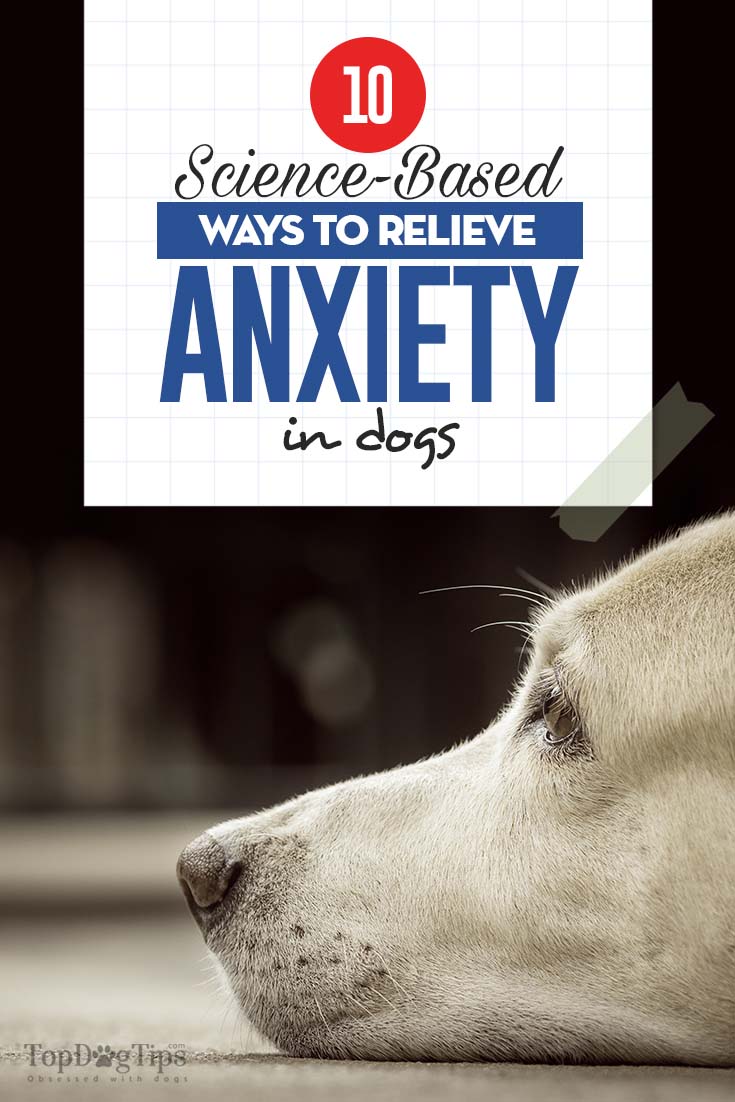 Studies on the introduction and elimination of neuroses in animals show that fear, anxiety and other undesirable behaviors are persistent habits that occur through learning (Wolpe, 1961). One effective method to successfully un-teach an undesirable behavior in animals is through counter-conditioning. Counter-conditioning is training the dog to behave positively in place of a negative behavior (such as fear or anxiety).

Repeatedly feeding your dog while it is responding to a stimulus that elicits weak anxiety, then slowly increasing to a strong stimulus may be successful in reducing anxiety. Each time the animal is exposed to food, the anxiety response becomes inhibited and is replaced with positive responses associated with eating.

On the other hand, desensitization is the repeated, controlled exposure of the stimulus that usually elicits fear or anxiety in your dog in such a way that your dog no longer has the undesirable response. When owners were provided a desensitization program for their pets, dogs showed a decrease in fear for loud noises, such as fireworks (Levine et al. 2007). In addition, systematic desensitization was found to be a successful treatment for dogs with separation-related anxiety (Butler et al. 2011).

2 Exposure to Different Social Situations and Environments as Puppies

Exposing puppies to various situations and environments when they are still young will reduce the chances of them exhibiting fearful behavior. Deprivation of experiences can make young dogs habitually fearful and anxious.

Training and learning during early life is critically important for learning of appropriate behaviours. For example, studies on rats and dogs show that restricting early experience (Thompson et al. 1954), such as removal of an enriched environment and learning new things, will results in better behaviour, learning ability and intelligence as adults.

Exposure to an enriched environment may also prevent the animal from being anxious or fearful of different stimuli.

In Scottish terriers, animals that were restricted of early experiences shows that there is a deficit in problem-solving ability and a retarding effect on intelligence at maturity. Exposure to different environments can be a learning experience in early life and can also contribute to the dog’s personality, such as emotional behaviors, fears and anxiety (Hebb, 1955).

Synthetic pheromones, such as Dog Appeasing Pheromone (DAP) or Adaptil, mimic the natural pheromones that mothers release during nursing. It's one of the most studied methods to help anxious dogs today.

Dog Appeasing Pheromones can be sprayed around the house or anywhere else your dog may be exhibiting anxious behavior. DAP is believed to make your dog feel safer and relaxed, resulting in very effectively relieving anxiety in dogs.

Pheromones, in general, can be used for general stress, separation anxiety, noise phobias and travel. A recent article we've published have analyzed more of the studies of dog appeasing pheromone collars for dogs and their proven effectiveness on anxiety in dogs.

In a study with 54 dogs that were afraid of fireworks, there was significant reported improvement in total fear severity scores and global fear scores (Tod et al. 2005). Some veterinary clinics use DAP in the waiting room to prevent anxiety and fear of dogs.

DAP resulted in greater relaxation of dogs in the clinic setting. In a shelter setting, DAP was effective in reducing barking and other indicators of stress in dogs (Mills et al. 2016).

Melatonin is a natural hormone that the body produced in the pineal gland that helps to control your sleep and wake cycle. Melatonin is often used to calm nerves, reduce anxiety, and facilitate deep sleep. 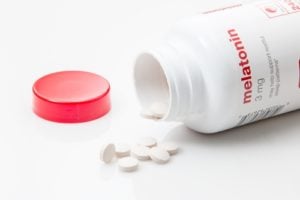 In an animal model, melatonin was shown to exhibit anxiolytic activity (Papp et al. 2006). In humans, an increase in melatonin secretion is associated with relaxation and decreasing anxiety and insomnia. Melatonin at doses of 4 and 6 mg/kg was able to reduce anxiety elicited by injections of lipopolysaccharide (Nava et al. 2001).

The amygdala area of the brain may be involved in the beneficial effects of melatonin on anxiety. When rats were administered melatonin in the amygdala, animals decreased behaviors of anxiety; however, spatial memory performance was negative affected (Karakas et al. 2011).

Anti-anxiety medications are drugs that are useful for alleviating symptoms of anxiety, and are typically used in combination with other types of therapy, including counter-conditioning and desensitization.

Some commonly used anti-anxiety medications for dogs include:

Alprazolam (Xanax): These are typically used for dogs with noise phobias, and can reduce signs of anxiety, such as panting, pacing, trembling, hiding, excessive salivation, destructiveness, excessive barking, and self-trauma when given at a dosage of 0.02mg/kg 1 hour before an anticipated storm (Crowell-Davis et al. 2003).

Clonazapam (Klonopin): Can be used to relieve anxiety in dogs as well as seizure control (at higher doses) (Crowell-Davis et al. 2008).

Diazepam (Valium): 24% of owners that use diazepam to decrease fear and relieve anxiety in dogs during thunderstorms reported Valium was effective (Herron et al. 2008). However, some negative side effects of Valium include sedation, increased appetite, agitation, and aggression.

Clomipramine: Separation anxiety, obsessive-compulsive disorder, and noise phobia was effectively controlled with the use of another anti-anxiety medication called clomipramine (Seksel et al. 2001).

If your dog’s diet consists mainly of junk food, he may become hyperactive or anxious. Although not a lot of studies have looked at this relationship, a study of 4,000 children in the UK showed that diets high in junk food intake was associated with an increased level of hyperactivity by the age of 7 years old and were likely to fall in the top 33% of the hyperactivity scale (Wiles et al. 2007).

In contrast, including polyunsaturated fatty acids, such as Omega-3 and Omega-6, can improve symptoms and help to relive anxiety in dogs, including appetite, mood, poor sleep, attention, focus and fatigue (Yehuda et al. 2013). 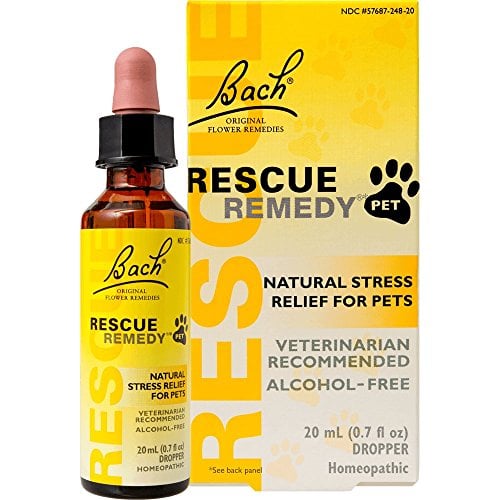 Bach flower remedies are a mixture of water, brandy and dilutions of flower materials, including chicory, heather, red chestnut, and honeysuckle, that was originally developed by a renowned homeopath named Edward Bach. It was thought that the flower petals have healing properties.

An example of a marketed Bach flower remedy is a product called Rescue Remedy, which contains five flowers. In a double-blind clinical trial, Rescue Remedy was shown to decrease measurements of anxiety (Halberstein et al. 2007). Although no formal experiments have been conducted on these herbal drops in animals, some dog owners attest to their ability to reduce anxiety.

INTERVIEW: How To Deal with Separation Anxiety in Dogs

Skullcap is a powerful medicinal herb that is grown in eastern North America and has been traditionally used to alleviate nervous tension, exhaustion, as well as to promote relaxation (Brock et al. 2014). Results from preliminary clinical research and in vitro studies are promising for the potential use of skullcap for anxiety and anxiety-related disorders (Brock et al. 2010).

Skullcap is used to treat a wide range of nervous conditions, including insomnia, hysteria, and withdrawal. It can also help to relive anxiety in dogs and humans.

Valerian, like skullcap, is an herb that has traditionally been used to treat insomnia, stress and anxiety. In a study comparing the effects of valerian to anti-anxiety medications, they were comparable in relieving anxiety (Shahinfar et al. 2016). Because valerian is a natural herb, it may be more beneficial to use instead of chemical medications to relieve anxiety in dogs.

However, Pet Remedy, a product containing Valerian, vetiver, basil and sage, and applied via a spray, was shown to not reduce the stress response in dogs (Taylor et al. 2016). This indicates that further research on valerian's ability to relieve anxiety in dogs is necessary.

Zylkene is a natural remedy that helps to relax and calm your pets, particularly in stressful situations, such as thunderstorms and a clinic environment. The active ingredient in zylkene is a refined protein that is typically found in milk that stimulates receptors in the brain.

Numerous studies have looked the effects of Zylkene.

Zylkene was effective in:

Anxiety in dogs may seem innocuous at first, but the cascade of emotions and actions that come after can have massive repercussions not only for the health of the dog, but also the health of the relationship with its owner(s). Thanks to medicines helping in treating anxiety in humans, combined with some canine specific solutions, treatments now exist to ease the stress and relieve anxiety in dogs.

READ NEXT: 12 Signs Your Dog Is Stressed 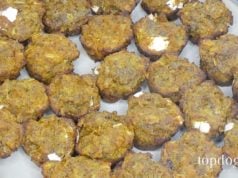