There is a new canine celebrity on the horizon – a real-life hero who will soon star in an IMAX film about dogs with superpowers. Ricochet is a one-of-a-kind dog who pairs surfing with helping in the most unique and heartwarming way. Hailing from Escondido, California, Ricochet loves both surfing and helping children with disabilities.

Now he will co-star in a 3D movie which will showcase his special talents and abilities. Ricochet initially failed service dog training, but his owner, Judy Fridono  (formerly a service dog trainer),says he persisted with his altruistic calling anyway. He pushed forward to begin his work with military veterans who had post-traumatic stress disorder, as well as children with disabilities.

The famous pooch is already well known in Hollywood. He has appeared on Oprah, national talk shows, popular newscasts, and in hit movies like Marmaduke. He has also made it into literature by being featured in magazines and by having a biography (Ricochet) written about him.

For more information, check out our book review of Ricochet by Judy Fridono. 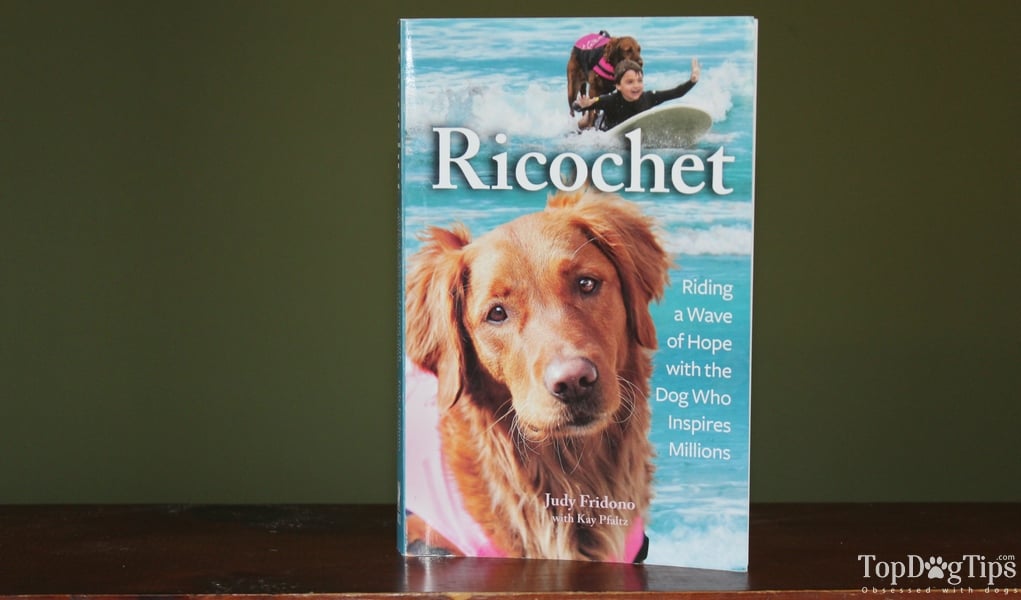 Cosmic Picture has agreed to produce Superpower Dogs in association with the California Service Center. Fridono will assist on the project. The team hopes to be able to release the film on giant screens in 2018.

Ricochet will co-star in the film, which seeks to showcase the superhero-like abilities of dogs’ ears, eyes and noses. It will explore how people are using those super-senses to heal others and save lives.

The movie will tell the tale of real-life rescue canine Halo, and her path to becoming a search and rescue dog. Along the way, Halo encounters other superhero dogs, who perform rescue missions, save other animals from being poached, and (enter Ricochet), help disabled surfers gain back their sense of freedom.

According to the film campaign’s website, 20 percent of the profits earned from this project will be given to working dog organizations such as:

This is an amazing opportunity to raise awareness about dogs’ talents and abilities, as well as their special place in our lives. Dogs have been our loyal friends for thousands of years, and have always helped us. Now, we can finally see that idea in action through the eyes (and ears, and noses) of the canine companions who rescue humans every day.

People often take dogs for granted. They adopt a puppy, only to give it up once it becomes an “inconvenient” adult. They leave their dogs behind while they go on adventures, viewing the dogs as obstacles to their fun and freedom.

People re-home their dogs when they have children, thinking a dog to unsafe or time consuming to be able to keep around a baby. The truth is that dogs are the opposite of all these things. They enrich our lives, they add to our fun, and they protect us. If we open our hearts to them, we learn concepts like unconditional love, selflessness, and loyalty.

Canine companions like Ricochet and Halo exist everywhere. We hear stories almost every day about dogs keeping children safe from harm or helping their owners avoid dangerous issues associated with medical conditions. Dogs are born wanting to help humans. This is, after all, what they were being bred for, for centuries.

This film will hopefully serve to not only bring the inherently heroic nature of dogs to light, but to encourage us all to help them realize their full potential by exploring training programs and opportunities to allow dogs to help people in any way they can.