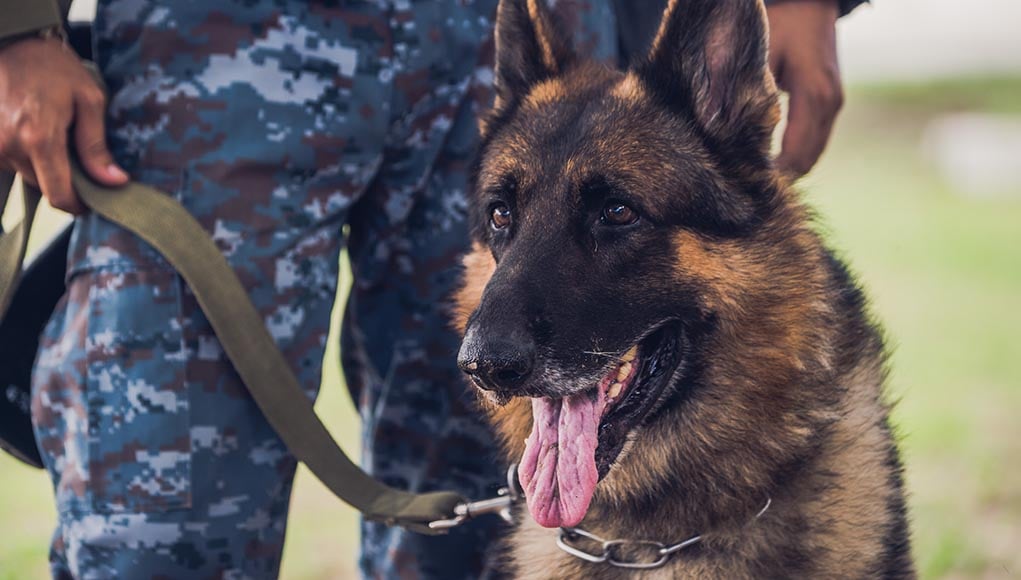 You don't see them; they are on dangerous missions with their masters; they help catch the bad guy; or maybe they are helping a search party. These aren't regular dogs you cuddle up to on your couch. They are trained and prepared to be brave and bold. They are military dog breeds, meant for a tough job.

Besides sniffing out hard drugs, criminals, or lost persons, they can also serve as personal security. Here you will learn about the dogs that serve these purposes. Military dog breeds are mostly deployed to riots, combat zones, and emergency outfits, but they can also perform well at protecting you and your family.

The training of these dogs is different. Some are trained for one specific purpose, while some can be trained several purposes. It depends on what their ultimate job with be. They perform valiantly in their duties and that makes them worthy of recognition. Keep reading to learn more about this amazing breed of dogs.

What are Military Dog Breeds?

Military dogs have their history dating back to ancient times. Over the years, they have been trained and used for several functions in the military and beyond. This breed has been scouts to sentries, messengers, mercy dogs, and even trackers. Military dog breeds use varies depending on the situation, they are trained to be ready for a specific assignments. Military dogs are assigned to one handler. They are trained for war scenarios and the handlers are responsible for them. The military dog breed is trained to meet the demands of the handlers.

The roles these dogs perform have changed over the years, due to the evolution of warfare. For instance, in the Second World War, some of their functions were to pull small milk carts or to be a messengers. Today, military dog breeds are involved in heroic activities.

Because of each breeds differences some are more suited and adapted for certain roles than the others. Therefore, because of their specific breed they will undergo specialized training based on what they are best suited for. 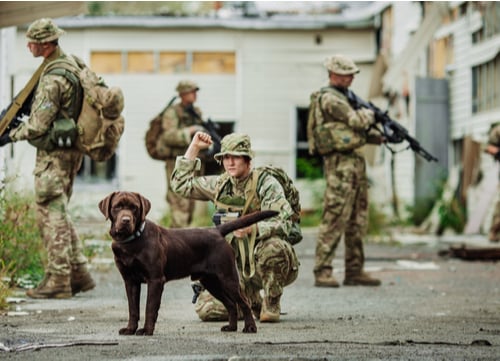 Dogs are becoming more crucial to military warfare than ever. They perform tasks that humans can not, as well as take care of basic tasks that help humans maximize numbers on the important things. Here are some of the functions military dogs perform in warfare.

This is not of common practice anymore. However, in the 19th and 20th centuries, this was common in Belgium and Holland. The military dog breed was used to transport guns during the war. They were reliable and smaller in size, which made it easier for the military officers to take them into bunkers and other concealed areas. This is near impossible with horses.

In the past and still today, military dog breeds are used to attack. In the past, these dogs were more fierce and always in attack mode against the enemy. However, thanks to the advanced training, today they have been taught to hold defensive positions, and only when this position is threatened, they attack and pin down the intruder or enemy. This type of training is advanced, and involves training the dog to understand various scenarios and make the right decision.

This military dog breed is also known as a mercy dogs. They play an important role in wartime. Much of their heroic experience was in the two world wars. They locate injured persons with their sense of smell and keen hearing. During wars, Red Cross dogs are deployed to find soldiers, who could be in hiding waiting for rescue.

These dogs are trained to detect explosives. This military dog breed helps alert soldiers of the danger of explosives or mines as they step into unknown territory. The dogs achieve this with their sense of smell. They undergo several months of training just for this purpose. The number of dogs that perform this function for the US marines has risen to about 600.

Another major function of military dog breeds is to guard important locations. They are very successful in warding off enemies from wherever they have been deployed. During the cold war, they were used to guard nuclear weapons. Some civilians use the military dog breed trained for protecting their homes and properties.

This specialized function is when they have been trained to search for stores or ammunition, enemy fighters and ambushes. The most common military dog breed to performed this role are the German shepherds. They give their handlers a warning if they spot any danger on the way. The scout is highly effective at warning troops and making them less susceptible to surprise enemy attacks. Soldiers can then be in a defensive positions. This dog can also be trained to detect the enemies hiding underwater.

This military dog breed is trained to be used in special operations. They are usually very fast and run ahead of their handlers. They detect explosives, search through buildings and can provide intelligence via a camera link. The black ops trained dog is provided with equipment, such as canine tactical assault vests, doggles (with night vision, ability to see through walls, spot human heat alongside infrared capabilities). They commonly work with the SEAL teams of the Navy. This dog undergoes rigorous training just like their trainers.

Military dog breeds trained for a variety of different purposes, have been known to become a companion or a mascot. Because they have a well rounded background, completing a variety of missions during war and combat they end up inseparable from their handler.  The emotional support becomes just as vital as the hard work, therefore the can become the mascot of the troops. 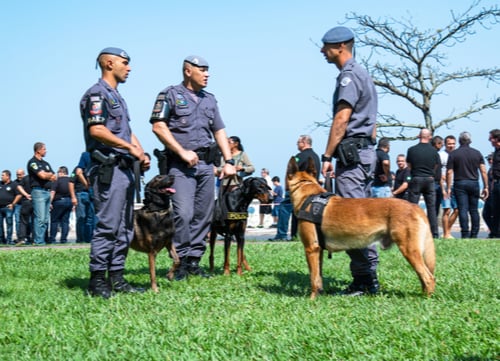 This breed is commonly use in the military. Several reasons why is that they are physically very strong, agile, and easy to train. This military dog breed, by nature, is not overly aggressive as some other breeds of dogs. This is important during times when they need to remain calm in hostile conditions. The German Shepherd is very loyal and predictable. This makes them just right for the military.

This military dog breed is mainly used as scouts and detectors. Their sense of smell is exceptional. They are well suited when properly trained for search and rescue missions. Because of their excellent sense of smell they are also great at sniffing out explosives. The Labrador Retriever is effective at their job and very obedient.

This breed is lean and very athletic. They are renowned for their intelligence, ease of training, and alertness. Because of these traits they make great scouts or patrol dogs. The Doberman Pinscher are mostly on the front lines during wars and combat missions.

This is a beautiful breed is confident in and of itself. The Rottweiler is  ready to work and known for their loyalty. This military dog breed is best used as messengers. They have a strong devotion to their handlers. They are diligent and go through thick and thin to deliver information when humans can't. This breed may not always be on the frontline of the battles, but they are useful when the time comes for information exchange between forces.

This dog is super alert around strangers. It is strong, athletic, and agile. It can serve as a messenger dog, scout, or patrol dog. This military dog breed is versatile, and are widely used in the military.

Sometimes, this military dog breed can be difficult to handle, if not trained properly. However, they are mostly listening dogs and take commands well. They remain loyal but don’t like strangers. The Airedale Terrier function is mainly as a scout or patrol dog. The airedale terrier also has a very strong sense of smell.

This military dog breed is reserved and wary of strangers. If a stranger crosses enemy lines, they are excellent at alerting the troops immediately.

This breed is renowned for their search and rescue capabilities. They are adapted for work in cold and snowy regions. Which makes them invaluable if a military dog is needed in this climate. 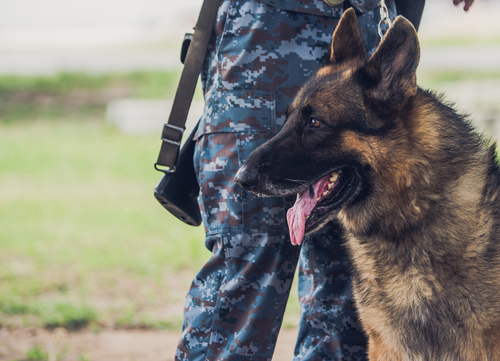 Facts You May Not Know about Military Dogs

Military dogs have a long history, especially in the United States and Europe. Military dog breeds have always been to war with US soldiers, however, they only started getting the recognition they deserved during World War II. It was during that war that military officers recognized the value they bring to the camp, and they were honored for that.

Only about 50% of military dogs make it through training. They are trained rigorously and taught several survival skills. This is critical for dogs in the SEAL team especially. These breeds are saddled with difficult assignments, so they are ready for anything beyond what their natural abilities are. Not all dogs pass the test.

Military dog breeds can also suffer from PTSD. It is common for human soldiers to suffer from PTSD when they leave active service. The same goes for the military dog. Wars can lead to emotional trauma, and for some, it can be overwhelming. Military dogs have been known to mourn when their handlers die. As the handlers too mourn when their dogs die. The pairing of a handler and dog is for the long-term, both get emotionally connected. There is a strong loyalty between them.

Military dog breeds are simply amazing. Their lifestyle is different from any other dogs. They have a rich history of service which may not have always been recognized and rewarded. However, in recent times military dogs are being treated properly during active service and post-service. Military dogs are simply head and shoulders above the rest. 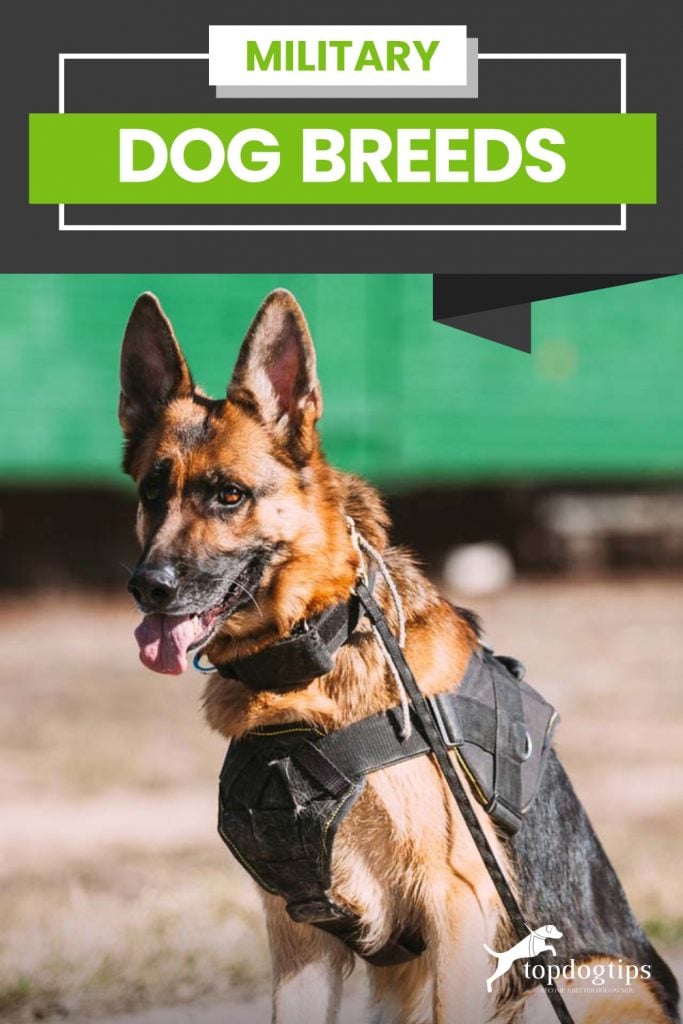